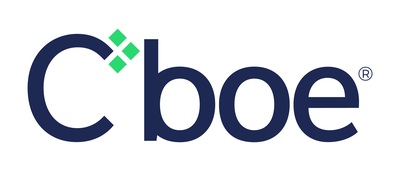 Cboe Global Markets (Cboe: CBOE) is one of the world's largest exchange holding companies, offering cutting-edge trading and investment solutions to investors around the world. The company is committed to defining markets to benefit its participants and drive the global marketplace forward through product innovation, leading edge technology and seamless trading solutions.

The company is headquartered in Chicago with a network of domestic and global offices across the Americas, Europe and Asia, including main hubs in New York, London, Kansas City and Amsterdam. For more information, visit www.cboe.com.

BZX®, Cboe®, Cboe Global Markets®, Cboe Volatility Index®, CFE®, EDGX®, and VIX® are registered trademarks Cboe LIS SM and XSPSM are service marks of  Cboe Exchange, Inc. or its affiliates. S&P 500® and SPX® are registered trademarks of Standard & Poor's Financial Services, LLC and has been licensed for use by Cboe Exchange, Inc.  Any products that have the S&P Index or Indexes as their underlying interest are not sponsored, endorsed, sold or promoted by Standard & Poor's or Cboe and neither Standard & Poor's nor Cboe make any representations or recommendations concerning the advisability of investing in products that have S&P indexes as their underlying interests. All other trademarks and service marks are the property of their respective owners.