LONDON, March 10, 2020 /PRNewswire/ -- London-based trio Parma Comets released their latest single Thunderbird on March 3rd, which is available on all major streaming and download digital platforms. The band kicks off 2020 with a tune that blends vintage tones with modern touches and a contemporary theme, creating a signature sound all of their own. The Comets have high-energy gigs lined up for 2020 where they will be playing Thunderbird as well as other upcoming singles. 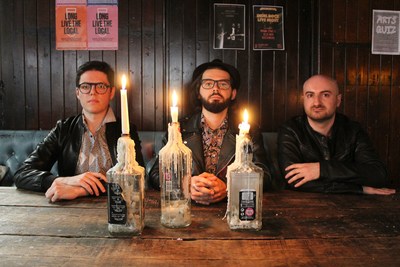 Formed in late 2018, Parma Comets are Louis Séris from France on guitars and vocals, Lorenzo Milani from Italy on bass and backing vocals, and Giovanni LoBue from London and Italy on drums and percussion. The three members bring together their different tastes to create music with influences from classic rock, punk, indie, blues, funk and jazz, and their international backgrounds blend in a distinctly London style.

In early 2020, the trio hit the studio to channel those influences into new songs. Recorded at Viva Recorders Studios in Holloway under the guidance of owner and engineer Tim Hamper, Thunderbird is the first of these tunes and showcases the band's grittier side. The song channels in equal parts Neil Young and Kurt Cobain and is inspired by the mythical creature of the same name from Native American folklore and mythos.

Viva Recorders Studios is a goldmine of vintage and eclectic gear which spurred the band to experiment with different analogue sounds. All songs were mastered by Pete Maher (Rolling Stones, U2, Pixies) and the fantastic artwork for Thunderbird was created by French artist Eric Fourment.

After gigging regularly throughout 2019 at venues such as The Water Rats, The Amersham Arms, and the New Cross Inn, in September the Parma Comets secured an ongoing residency at the historic George Tavern in Shadwell, curating monthly Rock and Folk events with hand-picked solo and group acts from the London indie and folk scene.

The trio will be promoting Thunderbird and the rest of their catalogue during their 2020 live dates, and are set to release two more singles later on in the year. Upcoming Rock and Folk events at the George Tavern will be on March 18th and April 24th.