Sylvester Stallone's Rocky Like You've Never Seen It Before

Sylvester Stallone's Rocky Like You've Never Seen It Before

"Becoming Rocky: The Birth of a Classic" Documentary Available Worldwide from June 9th

LONDON, June 2, 2020 /PRNewswire/ -- Over 40 years' ago Sylvester Stallone was an unknown actor with a dream. "Becoming Rocky: The Birth of a Classic", charts the creation of the most classic underdog story of all time, exclusively told by the legend himself. 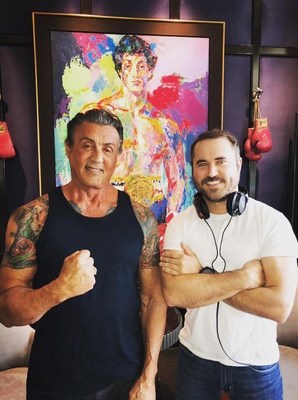 The whole world knows the Rocky franchise but very few know how this iconic film changed the lives of so many involved. This documentary will not only appeal to die-hard Rocky fans but to those interested in how cinematographic history was made during the making of the first film. Rocky not only changed the lives of many for generations to come, but it revolutionised the art of filmmaking.

Rocky will once again be brought to life with rare, behind-the-scenes and never-before-seen footage. Stunningly woven together with Sylvester Stallone's passionate and relatable narration.

Derek Wayne Johnson's documentary allows audiences to delve into the heart of this legendary story. A must-see story that has the grit, determination and never-give-up spirit that is so powerful and much needed in these difficult times.

"The documentary is a golden nugget for 'Rocky' fans and casual audiences alike," says Johnson.  "It's a charming piece of film history narrated by Rocky himself, Sylvester Stallone, and will give audiences an intimate, and at times, emotional experience. We're proud of the film, and audiences can expect new stories and new footage that they've never seen before in a blend of director John Avildsen's home movies, rehearsal footage and behind-the-scenes footage from the making of the ultimate underdog film."

Personal home movie and behind the scenes on-set footage give a personal rendition of what it was like for an unknown actor to come from nowhere and make one of the most iconic movie franchises of our time.

Charlotte Fantelli from Branded Studios, UK, who is behind the worldwide launch, says: "Just as Rocky inspired me and millions of others, the story of its creation is just as incredible. This documentary is a truly inspiring human spirit story and I'm overwhelmingly proud to be presenting it."

Visit www.becomingrocky.com to pre-order your digital download now or get involved with the hype on social - follow @BecomingRocky