SEOUL, South Korea, June 3, 2020 /PRNewswire/ -- The Seoul Metropolitan Government said it held the Mayoral Meeting with mayors and governors from 42 cities around the world participating at the video conference studio prepared at the Seoul City Hall on June 2, the second day of the world's first international video conference "CAC Global Summit 2020." 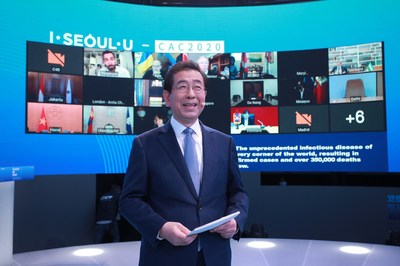 Around 120 participants, including Seoul Mayor Park Won-soon and other world city mayors, scholars, and experts participated in the Summit to discuss ways to overcome the worldwide crisis of infectious diseases and a post-COVID-19 era, for five days from June 1 to 5.

At the Mayoral Meeting held on June 2 (KST), Seoul Mayor Park introduced Seoul's successful quarantine know-how to fight against COVID-19 in his keynote speech with the theme of "Seoul's Proposal for Overcoming Urban Crises in the Pandemic Era," and suggested the creation of an intercity network, tentatively named "Cities Alliance Against Pandemic (CAAP)."

CAAP will be the first international organization of world cities dealing with infectious diseases. It aims at making solidarity and cooperation between cities to preemptively respond to global infectious diseases and setting a model that can be applicable to cities around the world.

Participating world city mayors agreed to the establishment of the CAAP and jointly declared the "Seoul Statement."

The "Seoul Statement" includes the roles of participating cities, focusing on forming the earlier recognition system against infectious diseases and making cooperation for preemptive responses; sharing information and implementing joint efforts to contain the diseases; swiftly supplying human and material resources in the crisis of infectious diseases; exchanging human resources between cities to foster professionals of infectious disease response; supporting the free movement of people and goods between cities and economic activities to overcome social and economic difficulties.

During the 90-minute Mayoral Meeting, participating mayors discussed how urban life will be changed and what mayors should prepare if infectious diseases such as coronavirus break out again in cities around the world.

In his keynote speech, Seoul Mayor Park introduced the "S-Quarantine" in the following three: 1) swiftness, transparency and innovation; 2) leadership of the city government in step with the central government, and high level of citizenship that follows the quarantine guidelines, such as keeping the social distancing and wearing masks; and 3) making international community's solidarity and cooperation.

London Mayor Khan said, "Mayors are not walls but bridge makers. I strongly agree with strengthening global solidarity and cooperation between world cities emphasized in the Seoul Statement." Governor Hogan said Maryland is currently focusing on preemptive and active countermeasures to combat COVID-19 and expressed his gratitude to Korea for the support for their purchasing of 500,000 test kits last April. Jakarta Mayor Baswedan said, "80 percent of the confirmed cases had come from Jakarta. I would like to take this crisis an opportunity for a future paradigm shift to digital innovation and the green economy." Moscow Mayor Sobyanin said Moscow experienced the spread of coronavirus later than other cities did, so the city was able to learn from other cities and added, "Russia is also currently working hard to develop vaccines. If the clinical tests succeed, we will see some tangible results around this fall."

After the four cities' presentations, Mayors from 14 cities including Toronto, Delhi, Budapest, and Hanoi, shared their city's efforts and agreed with the need to exchange information between cities and to strengthen international cooperation to overcome this pandemic crisis.

The Mayoral Meeting was live-streamed through the city government's YouTube channel at https://www.youtube.com/seoulcityofficial with simultaneous interpretation available between English and Korean.

The Seoul Metropolitan Government expects the Summit will become a momentum to strengthen the world's city government's capabilities to respond to infectious diseases.

Meanwhile, Seoul opened the online platform "CAC (Cities Against COVID-19, http://english.seoul.go.kr/covid)," on April 9, to share the city's S-Quarantine policies and know-how at the request of cities around the world. In just two months of its opening, its page views increased to 7 million.