- Strengthened cash balance during COVID-19 crisis towards initiation of export and sales in Europe through a 29 million private placements of ordinary shares to Institutional investors, controlling shareholders, and long-term investors

TEL-AVIV, Israel, June 8, 2020 /PRNewswire/ -- Dr. Dadi Segal, CEO of Panaxia Global, said, "Panaxia started 2020 with a strong quarter boasting expanded operations, record quarterly revenues, and a shift to gross profit. Concurrently with increasing the number of patients in Israel, we are on track to initiate export and commercial sales in Europe later this year. We have reached several strategic and financial achievements in the first quarter, including progress in the regulatory registration of our products in Germany and Denmark." 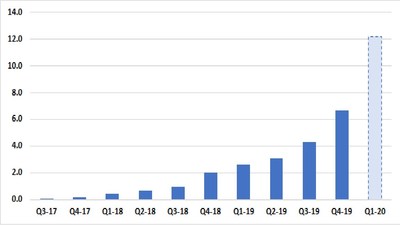 Dr. Segal continued, "We look forward to receiving the export license to start exporting to these and other target countries immediately. Even if the export license is delayed, we believe the completion of the production facility in Malta will allow us to expand our sales to Europe, as a provisional alternative until exports from Israel begin."

In the first quarter of 2020, the Israeli subsidiary, Pharmaceutical company Panaxia Labs Israel Ltd. (Panaxia Israel) (TASE: PNAX), the largest manufacturer of medical cannabis products in Israel, reports record revenues of 12.2 million, an increase of approx. 83% compared with the revenues in the fourth quarter of 2019, and a 365%-increase (over X4 times) compared with the revenues in the first quarter of 2019. The consecutive, 10-quarter revenue growth is attributed to the expansion of the production, marketing, and home deliveries operations, as well as to the transition of working under the new Israeli cannabis regulation, which provides the Panaxia Israel with higher revenues per product unit. During the first quarter, Panaxia Israel continued to expand its patient base, as well as the number of products it delivered. The company estimates that the COVID-19 crisis, which started in the last two weeks of the quarter, has helped reinforce this trend with an additional increase in demand for products and home deliveries.

During the quarter, the company announced it had entered a first-of-a-kind collaboration agreement in the medical cannabis industry, with Neuraxpharm, Europe's largest CNS therapies company. It covers the commercialization and distribution of Panaxia's advanced cannabis products in Germany as part of Neuraxpharm's broad therapy portfolio.

Cash and cash equivalents, as of March 30, 2020, were 17.6 million, compared with 14.3 million in cash and cash equivalents as of December 31, 2019. The increase is primarily due to the closing of a 17 million private placement of ordinary shares and warrants, led by MORE Investment House and another accredited/institutional investor. The amount is net of a loan repaid to the parent company.

Subsequent to the end of the first quarter, in April 2020, the company strengthened its balance sheet through a total of 12 million in private placements of ordinary shares and warrants to the company's controlling shareholders and to long-term investors, including the chair, Mr. Jonathan Kolber, CEO Dr. Dadi Segal, and Mr. Ran Nussbaum and others.

Panaxia Labs Israel, Ltd. is a publicly traded company at TASE (TASE: PNAX). It is the largest Israeli manufacturer and home-delivery distributor of medical cannabis products, and the first to have received the approval of the Israeli Ministry of Health for the manufacturing of medicinal cannabis-based pharmaceuticals (under the IMC-GMP directive). The company manufactures over 30 hemp-based medicinal products and has accumulated a broad foundation of clinical experience based on tens of thousands of patients.

Panaxia is part of the Segal Pharma Group, owned by the Segal family and founded over forty years ago. The company manufactures over 600 different pharmaceutical products that are distributed in over 40 countries worldwide. Panaxia Labs Israel is a subsidiary of Panaxia Pharmaceutical Industries, co-founded by Dr. Dadi Segal, Dr. Eran Goldberg, and Assi Rotbart, Adv. as the cannabis division of the Segal Pharma Group. A sister subsidiary, Panaxia US, manufactures in North America over 60 hemp-based medicinal products, including sublingual tablets, lozenges, oils, and inhalators aimed for the treatment of conditions such as PTSD, cancer, chronic pain, epilepsy, anorexia, burns, and many other ailments. Panaxia Group has over 150 employees, and all clinical trials are conducted by its members.