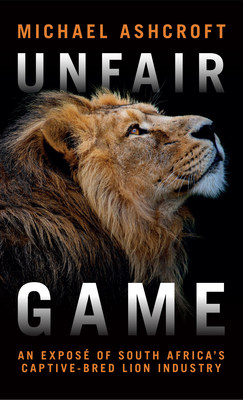 The book highlights the appalling cruelty – and often illegal practices – associated with the multi-million pound business of lion farming, in which Africa's most iconic animal is bred either for its bones or to become the target for trophy hunters in so-called canned hunts.

In fact these 'hunts' involve a lion, often semi-tame and drugged, being shot in a restricted area from which it has no chance of escape.

Lord Ashcroft, an international businessman, philanthropist, author and pollster, used undercover operatives, including former members of the Special Forces, to infiltrate this sordid industry. There are now an estimated 12,000 captive-bred lions in South Africa, four times the number of wild lions.

Lord Ashcroft is campaigning vigorously for captive-bred lion farming to be banned in South Africa. He said: "Lion farming shames South Africa, a country that I have loved visiting for many years. It's time to recognise that it is a cruel and barbaric industry which has no place in the 21st century."

Lord Ashcroft also believes the UK Government must follow the lead of other countries, including the US, in banning the importation of captive-bred lion trophies and the trophies of other endangered species. He said: "The British Government can't control what takes place within South Africa's own borders but it can show our opposition to lion farming. We must not be complicit in any way with this vile practice."

Lion bones are in high demand in the Far East, particularly China and Vietnam, where they are – wrongly – believed to have medicinal qualities and to act as an aphrodisiac. A single lion carcass can fetch thousands of pounds and the bones from lions are often made into 'cake' or wine.

Similarly, a captive-bred adult male lion with an impressive mane can command up to £40,000 from trophy hunters wanting to shoot it in a canned hunt.

The full story of the two dangerous undercover investigations and their findings is told in Lord Ashcroft's new book 'Unfair Game' to be published on Tuesday, June 16, 2020.

Lord Ashcroft is donating all royalties from the book to wildlife charities in South Africa.