Two Months of 'Beautiful Aden': Half a Million Beneficiaries

Two Months of 'Beautiful Aden': Half a Million Beneficiaries

ADEN, Yemen, June 18, 2020 /PRNewswire/ -- In slightly more than two months, the 'Beautiful Aden' Cleaning and Environmental Sanitation Campaign of the Saudi Development and Reconstruction Program for Yemen (SDRPY) has exceeded its own expectations, removing 531% of the total accumulated waste that the project had projected it would clear by this stage. As of 8 June, the campaign had removed 46,600 cubic meters (m3) of waste in Yemen's provisional capital and benefited over 490,000 citizens. 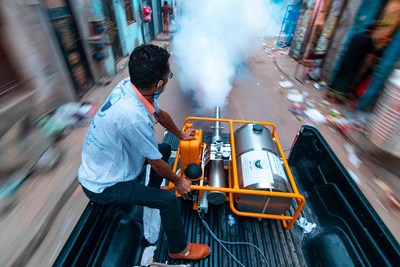 Across 696 job sites in 7 out of Aden's 10 districts, 'Beautiful Aden' helped remove and dispose of 32% of all garbage and waste. To improve the urban landscape, the campaign has watered trees with specialized irrigation vehicles provided by SDRPY, at a rate of 5,000 liters per work shift in 468 shifts.

One of the campaign's greatest successes is the 78% increase in the capacity and efficiency of the Cleaning and Improvement Fund of Aden (CIFA). SDRPY has supplied 22 pieces of equipment and heavy machinery to CIFA, including bulldozers, garbage compactor trucks and waste transport tankers. Altogether these vehicles have covered distances of over 200,000 km in carrying out their work. Average labor productivity during the campaign has risen by 431% across 1,124 work points and more than 2,181 shifts.

The 'Beautiful Aden' campaign has responded quickly and effectively to emergencies caused by torrential rains that have repeatedly hit Aden. Work teams have removed floodwater and waste to reopen main roads. The contingency operation removed 10,515 m3 of debris and flood waste – as well as discharging 7,475 m3 of rainwater from streets and residential areas – in 18 days at an average of 12 continuous working hours per day.

The campaign has also helped to combat epidemics and disease and limit the spread of COVID-19. On 12 June, SDRPY began a 30-day operation to spray and sanitize residential and public areas in Aden using specialized equipment to limit insect transmission in a procedure similar to one carried out in public and coastal areas of Hadhramaut province in April in partnership with the Yemeni Ministry of Health and the Cleaning Fund. The 'Beautiful Aden' campaign has also issued preventive guidelines to increase public awareness and implemented precautionary procedures for participants during the course of their work. Finally, SDRPY's health projects in Aden as elsewhere in Yemen, providing new hospital labs, medical clinics, equipment, supplies and medicines, have helped build capacity and resilience to the novel coronavirus and other ailments.

While the danger of pandemic transmission persists, its impact can be limited by complementing development projects with awareness campaigns and humanitarian aid. Increasing CIFA's operational capacity has mitigated damage from floodwater and flood waste that might have created swamps and spread disease.

Most recently, SDRPY launched a project in Aden to resurface major thoroughfares and line them with solar powered streetlamps, starting with the 5-kilometer Abyan coastal road between Jawlat Alaqil and Jawlat Arhab, and the 4.5-kilometer road between Caltex and Haswa Streets. Phase 1 of the project involves installation of 200 twin light poles on 9th Street from the Kubota intersection to Jawlat Alsafina, and 300 light poles along the Caltex-Haswa road.

In cooperation with the Government of Yemen and the Office of Public Works, the project aims to facilitate pedestrian movement between vital institutions, expanding access to healthcare, education and other basic services in the city, as well as to contribute to increased safety for both pedestrians and vehicles making essential journeys in the province. The program has already carried out or launched road rehabilitation and public lighting projects in other Yemeni provinces, such as Hajjah, Al-Jawf and Socotra.