Over the next six years, BRAC's Ultra-Poor Graduation Initiative will work with governments in countries with the greatest potential to scale BRAC's Graduation approach to help millions more people to lift themselves from extreme poverty.

NEW YORK, June 19, 2020 /PRNewswire/ -- Today, BRAC, a Global South-led NGO that combats inequality and poverty around the world, was announced as one of this year's Audacious Project grantees. The Ultra-Poor Graduation Initiative (UPGI), an initiative of BRAC, will receive more than $60 million to apply toward its goal of helping another 21 million people lift themselves from extreme poverty by 2026. 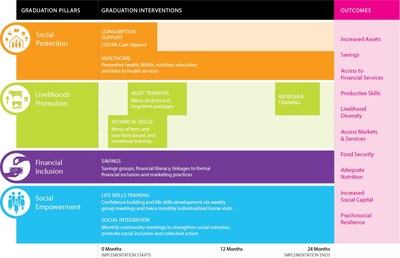 BRAC is the founder and largest scaled implementer of the Ultra-Poor Graduation approach (Graduation), having reached more than 2 million households in Bangladesh and developed and implemented adaptations of the approach in 14 countries covering a range of different contexts and vulnerabilities.

The announcement has come at a critical time when BRAC UPGI's services are needed more than ever. In the past few months, we have borne witness to unfathomable and unprecedented events around the world and in the United States; all which have worsened and shed a light on pre-existing, systemic inequalities that permeate our global society. The impact of COVID-19 and economic lockdowns to prevent further spread of the virus have created a humanitarian crisis of catastrophic proportion. The pandemic threatens to unravel decades of progress toward poverty alleviation. At the beginning of 2020, an estimated 700 million people lived in extreme poverty around the world. By the end of 2020, more than 70 million people could be forced to join them.

"We must act swiftly and design programs that meet the increasing and evolving needs of those living in extreme poverty - programs that are comprehensive, adaptive, and immediate but for long-term needs - to build resilience and support sustainable recovery," said Abed.

Our Audacious Project will support efforts to scale and implement BRAC's Graduation, a multifaceted intervention that helps the poorest escape extreme poverty and continue to improve their lives years after the program ends.

Through training in life skills, finance, and business skills, along with consumption stipends, an asset transfer, and regular coaching and monitoring, BRAC's Graduation two-year program addresses participants' complex needs and helps them create sustainable livelihoods to lift themselves out of extreme poverty.

But to scale globally, a systems-level approach with governments at the forefront is required.

"Governments have billions of dollars allocated to poverty programs already, but many are not reaching the most marginalized nor are they fully equipped to integrate Graduation into their systems," said Abed.

BRAC UPGI will leverage $5.8 billion dollars in existing government and donor funding and channel those toward well-executed government-led Graduation programs in countries in Sub-Saharan Africa and Asia with the greatest potential for impact and scale — lifting 21 million people out of ultra-poverty by 2026 — and setting millions more on the same path.

"The level of effort, programming, resources, and tenacity required to eradicate extreme poverty vastly exceeds the capabilities of a single organization or the Audacious investment," said Lindsay Coates, Managing Director of BRAC's UPGI. "To truly eliminate poverty in all its forms, BRAC urges governments, multilateral institutions, donors, NGOs, and policymakers to work together more effectively and commit significantly more resources."

"At BRAC, we believe in standing with those most affected by pervasive inequality and most at risk of being left behind. This is an act of justice -- not of charity."

About BRAC's Ultra Poor Graduation Initiative
The Ultra-Poor Graduation Initiative (UPGI) is an initiative of BRAC, a leading development organization dedicated to empowering people living in poverty. The goal of UPGI is to support the promotion and implementation of the Graduation approach, a framework designed by BRAC to meet the complex and interconnected needs of individuals and families who live in a precarious state of extreme poverty so severe that traditional development interventions fail to reach them. Graduation applies a holistic approach to meet participants' unique needs, providing them with a livelihood, skills training, financial services, and mentorship and coaching on social and health issues. Graduation is proven to contribute to long-term gains for participants, including an increase in income, savings, consumption, and confidence years after the programs ends, which has led to additional improvements within the household and community. BRAC UPGI is committed to scaling Graduation through government integration, and is partnering with country governments, like-minded organizations, and donors on effective solutions that leverage available resources and programming to achieve the long-term benefits demonstrated by Graduation.