LONDON, June 22, 2020 /PRNewswire/ -- The world's most popular single toy, celebrating 40 years since it became a global phenomenon, is inviting fans to participate in the world's 'most viewers for a Rubik's Cube solving lesson live stream on YouTube' on Thursday June 25 2020. The free to enter digital event will be hosted by the renowned speedcuber, Maryland USA-based Keaton Ellis, aged 22, who will host the event on Rubik's YouTube channel. 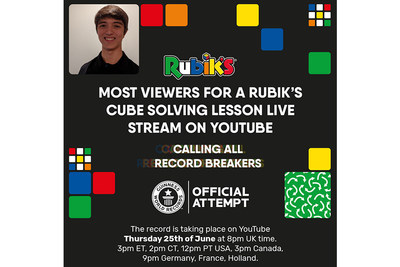 Rubik's brand CEO, Christoph Bettin, speaking from the London headquarters said, "While the Rubik's Cube is phenomenally popular, played by more than one billion people, we know that many struggle to solve the puzzle, so we want to change this conundrum. What better than to have a top speedcuber give a live lesson online where anyone can participate. The fact that we are likely to break a Guinness World Records title too is an added bonus."

Those wishing to join in the fun are encouraged to join the live stream on Rubik's Youtube channel where they will see details of the live digital event taking place at 8:00 PM UK-time on Thursday June 25. Participants can register here for an event reminder.

The event is aimed at complete beginners but participants are encouraged to look at the solution guides that can also be downloaded from the Rubik's website.

Christoph Bettin added, "There were 9,024 new 'how to do the Rubik's Cube' tutorials posted on YouTube between June 1 2019 and May 31 2020. In addition, there has been exceptional interest in solving the cube during the lockdown period as the popularity in puzzles generally has soared."

If you would like a reminder, you can register here in advance. Please visit the Rubik's website (www.rubiks.com) for further information.

The event will take place globally at 8:00PM (UK time) on Thursday June 25 2020 and is free for all participants.

In 1980, the Rubik's Cube was officially introduced to the world. Now in its 40th anniversary and led by CEO Christoph Bettin, 450 million Cubes have been sold to date with 2020 set to be a breakthrough year with over 20 million Rubik's products expected to be sold globally. Adding to the excitement of the anniversary year, Rubik's has formed several partnerships to create brand new and unique Rubik's themed games and puzzles. These include Etch-A-Sketch, The Op, Perplexus, DeKryptic and Marvin's Magic.

The organisation believes that inspiration comes from reading, watching, listening to and participating in record-breaking.

The people at Guinness World Records don't define or recognise success in a conventional or limited way and therefore draws upon the entire range of superlatives to help people realise their potential and to re-examine the world.