SAN JOSE, California, June 30, 2020 /PRNewswire/ -- MayaData, the creator of the most widely-used open source Kubernetes-native storage OpenEBS, has received acceptance of another open-source project LitmusChaos into CNCF Sandbox. With the acceptance of LitmusChaos into the CNCF, MayaData adds to the industry's first complete, open-source, solution for using Kubernetes as a data layer, enabling Kubernetes SREs and platform teams to develop, deploy, and operate stateful workloads on Kubernetes faster and more reliably. The complete solution, Kubera, was announced last week and is free forever for individual usage as SaaS and also on-premise. 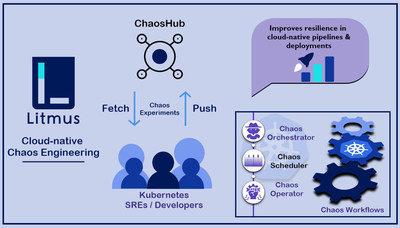 "We are extremely thrilled about building a larger community around chaos engineering in the CNCF ecosystem for wide adoption of Litmus. Practicing chaos engineering in a cloud-native way is essential for faster application delivery and improved resilience in production," said Uma Mukkara, Co-Founder of MayaData and sponsor of the Litmus project. "What started as our own tooling for user success has evolved into an active community, with excellent contributions and core activities already being led by engineers from companies as diverse as Intuit, RingCentral, Wipro, Container Solutions and Zebrium. We'd especially like to thank the maintainers, contributors, adopters of Litmus, volunteers in the CNCF community, and specifically, the App-Delivery-SIG whose feedback and due diligence have helped us tremendously." The journey of Litmus project from inception to sandbox and the roadmap is discussed in our blog here https://blog.mayadata.io/litmuschaos-is-now-a-cncf-sandbox-project.

"Litmus is one of the most promising open-source chaos engineering frameworks that takes into account proper chaos engineering principles while providing autonomy and extensibility to the users," said Andreas Krivas, an active member of the Litmus community and Lead Cloud-Native Engineer at Container-Solutions.

LitmusChaos brings chaos engineering to Kubernetes in a cloud-native way, with a pluggable architecture of different chaos experiments. LitmusChaos experiments are shared via the ChaosHub, a place where Developers and Kubernetes SREs share chaos experiments as Helm charts to improve their own chaos engineering and share and improve their best practices industry-wide. Popular charts include experiments to kill pods and containers, hog CPU usage, and simulate full disks. Experiments can also be tied together to create complex chaos workflows via integration with Argo, another CNCF project. There are also project-specific collections of Chaos charts including those for OpenEBS, Cassandra, Kafka and CoreDNS.

MayaData is already the largest private company contributor to the codebase of CNCF projects, trailing only Google, RedHat / IBM, VMware, and Microsoft. The contribution by MayaData of LitmusChaos to the CNCF furthers solidifies the position of MayaData as one of today's leading open-source cloud-native contributors.

MayaData has become the trusted partner for users using Kubernetes as their data layer thanks to a code first strategy, that has resulted in thousands of users, active OpenEBS and LitmusChaos open source projects, and the recent launch of Kubera as an all in one solution for operations of stateful workloads on Kubernetes. Customers and users include Bloomberg, Comcast, Arista Networks, Optoro, Orange, Intuit, Intel and thousands of others.

MayaData products and services deliver data agility and massive cost savings - led by Kubera a SaaS solution that simplifies the operations of Kubernetes as a data plane. MayaData sponsors two Cloud Native Computing Foundation (CNCF) projects, OpenEBS - the leading open-source container attached storage solution - and Litmus - the leading Kubernetes native chaos engineering project, which was recently donated to the CNCF as a Sandbox project. As of late June 2020, MayaData is the fifth-largest contributor to CNCF projects. Well-known users of MayaData products include the CNCF itself, Bloomberg, Comcast, Arista, Orange, Intuit, and others.