Premium Passports Lose Their Shine in a Post-pandemic World

Premium Passports Lose Their Shine in a Post-pandemic World

LONDON, July 7, 2020 /PRNewswire/ -- As parts of the globe cautiously begin to open up, the focus is on what travel freedom and global mobility will look like in a post–Covid-19 world. Last week the EU released a list of countries that would be allowed entry into the bloc from 1 July based on health and safety criteria. Included were Australia, Canada, Japan, and South Korea that traditionally score highly on the Henley Passport Index — the original ranking of all the world's passports according to the number of destinations you can access without a visa. However, in a move perceived as a stinging rebuke for its poor handling of the pandemic, the US was notably excluded from the welcome list, as were Brazil and Russia. 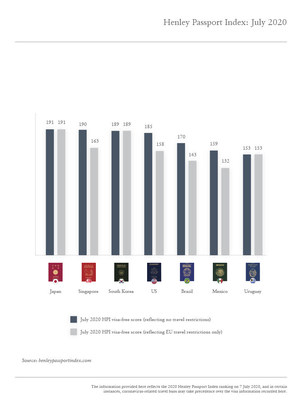 Although not reflected in the latest ranking, which does not take temporary travel bans into account, it is eye-opening to consider what travel freedom currently looks like for the holders of once-prestigious passports. The US passport usually ranks in the top 10, with its citizens able to access 185 destinations without a visa. However, under the current EU ban, Americans have roughly the same level of travel freedom as citizens of Uruguay and Mexico (ranked 28th and 25th respectively).

Russian citizens — whose passport usually ranks ahead of countries such as Georgia and Albania (both included on the EU's list) — have seen their passport strength reduced to one of the weakest in the region. And Brazilian passport holders — most recently placed 19th on the index ­— currently have roughly the same travel freedom as citizens of Paraguay in 36th position.

Without taking the current travel bans into account, Japan continues to hold the number one spot on the Henley Passport Index with a score of 191. Singapore remains in 2nd place, while Germany and South Korea are in joint-3rd place. Singapore however has been excluded from the EU list so its citizens currently have far less travel freedom than their closest competitors on the index, which is based on exclusive data from the International Air Transport Association (IATA).

Dr. Christian H. Kaelin, Chairman of Henley & Partners and the inventor of the passport index concept, says this latest decision by the EU indicates there's more upheaval to come. "Look at the US passport, for example — in 2014, it held the number one spot in the world on our index, but US nationals currently have far less travel freedom than most citizens of wealthy, industrialized nations and even of some less developed nations, being effectively locked out of Europe. In the coming months, we will see an emergence of a new global hierarchy in terms of mobility, with countries who have effectively managed the pandemic taking the lead, while countries who have handled it poorly falling behind."

Experts suggest that the Covid-19 crisis is likely to make international mobility more restricted and unpredictable in the longer term. "Even as countries open their borders, it is expected that numerous governments will use epidemiological concerns as a justification for imposing new immigration restrictions and nationality-targeted travel bans that will mainly be aimed at citizens of developing countries," says Prof. Dr. Yossi Harpaz, Assistant Professor of Sociology at Tel Aviv University. Noting the recent decision by the EU with respect to the US and other countries, Harpaz says, "The passports of both developing and developed nations stand to decrease in value, at least temporarily. In such uncertain times, global demand for dual citizenship and investor visas is expected to increase."

Dr. Juerg Steffen, CEO of Henley & Partners, says for investors and their families, "having a second citizenship or an alternative residence is an even more precious asset than ever before, as concerns over access to first-rate healthcare, global mobility, and quality of life take on a new urgency."