HOLLYWOOD, California, July 7, 2020 /PRNewswire/ -- The new show, now streaming on Amazon's Prime Video, features chefs from LA's top vegan restaurants cooking up extraordinary plant-based dishes, which are needed now more than ever to achieve optimal health during these perilous times. The show is free for Prime members!
Check it out here: https://amzn.to/2VysJQ9 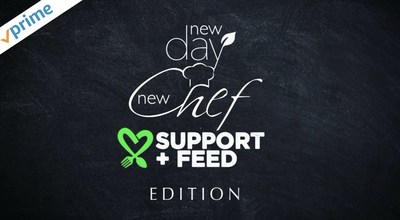 The Food
On New Day New Chef Support and Feed Edition, LA's top chefs veganize a German pastry - called a Maultaschen - by filling the dough with spinach and peas instead of meat. Jackfruit is transformed into fish cakes. The classic Mexican burrito gets a makeover with pickled cabbage. There's a new spin on Italian Panzanella salad, a wild take on peanut butter sandwiches and an ice cream pie made with almonds. All of it: 100% cholesterol-free, dairy-free and meatless, packed with vitamins, minerals, anti-oxidants and anti-inflammatories to fortify our health.

The TV Cook
One of the stars of this special edition is Lesley Nicol, the award-winning actress who plays Downton Abbey's endearing head cook Beryl Patmore. Mrs. Patmore cracks eggs and whips cream in the historic drama's kitchen. But, in real life, actor Lesley Nicol has had a change of heart when it comes to what's in her stew. Fans may be surprised  to learn that Lesley has become a vegan. She's even taking vegan cooking classes from one of the show's chefs, Sun Cafe's Ron Russell, who shows viewers how to make butternut squash Coulis topped with roasted vegetables and vegan feta cream.

Support and Feed
In this special edition, the food is delivered to those most in need, from children's charities to senior centers, by the amazing organization Support and Feed created by Maggie Baird, actress and mother to superstars Billie Eilish and Finneas, who all appear on the show.

Nutrition
Doctor Neal Barnard, President of Physicians Committee for Responsible Medicine, calls it the perfect show for our times: "New Day New Chef Support and Feed Edition breaks critically important new ground as people everywhere rethink what to eat for health, ethics, and the environment. It's engaging and fun, as it tackles the issues that matter most." Dr. Barnard appears on the show explaining plant-based nutrition.