Rubik's Cube's 40th Anniversary Celebrates the Adventure of the Solve

Rubik's Cube's 40th Anniversary Celebrates the Adventure of the Solve

LONDON, July 13, 2020 /PRNewswire/ -- During the 40th anniversary year of the puzzle becoming a global phenomenon, the team at Rubik's Brand is focusing on educating people how to solve the cube and making it possible for everyone. 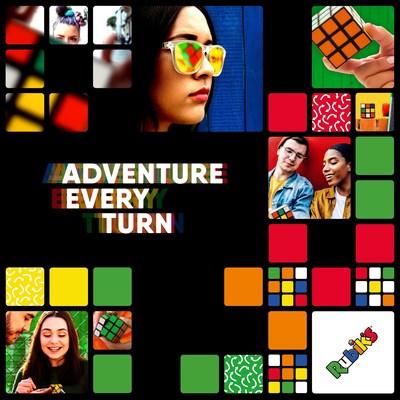 The brand's website includes downloadable and mobile-phone friendly solution guides and the YouTube channel is packed with entertaining videos to suit all skill levels.

Several Rubik's ambassadors including Keaton Ellis from the USA and Jack Cai from Australia have been recruited to inspire and teach people all about the solve, and each Friday they broadcast to the Rubik's social Channel's subscribers and followers, with the hashtag #FastFriday.

Christoph Bettin, the Rubik's Brand CEO, said, "We quickly learned at the start of the lockdown that solving interest was at an all-time high by those choosing to occupy their time with learning a new skill. Very quickly, the term #CubeAtHome was seen by over 17 million people on the TikTok channel, and this spread to other social media platforms with #AdventureEveryTurn hitting 2.1 million views in just one month.

"We amplified social channel interest with a new campaign called 'Adventure Every Turn', which encouraged cube fans to view solution guides and enjoy the challenge of unravelling a scrambled cube."

In 1980, the Rubik's Cube was officially introduced to the world. Now in its 40th anniversary year, nearly half a billion Cubes have been sold to date with 2020 set to be a breakthrough year with over 20 million Rubik's products expected to be sold globally. Adding to the excitement of the anniversary, Rubik's has formed several partnerships to create brand new and unique Rubik's themed products outside of the usual games and puzzles. These include Etch-A-Sketch, The Op, Perplexus, DeKryptic and Marvin's Magic.

Professor Ernő Rubik celebrates his 76th birthday today (Monday July 13 2020), a fact that will be shared by superfans globally. On Wednesday July 29 2020, a new documentary called Speedcubers airs on Netflix. It follows the story of two speedcubing legends, Feliks Zemdegs from Australia and Max Park from the USA, who participate in a championship competition.  The trailer alone has been viewed over 100,000 times. YouTube viewers' comments include 'This is the kind of story Hollywood would make movies about in the 80's. Glad to see love for the Rubik's Cube is still vibrant' (TheGrandTurk) and 'Love seeing all the comments from people who aren't cubers getting interested in the hobby and the community' (TeboeCubes).

Christoph Bettin summarises, "Face-to-face events are on hold for reasons of safety and social distancing but we've seen a phenomenal growth in digital engagement. This change in circumstance has seen a massive growth of interest in puzzles and games, together with a yearning for nostalgia.  The 80's is now a decade admired even by those too young to experience it the first-time round.  We will continue to celebrate during the anniversary year, when events that were hitherto 'in person' may well be adapted to online experiences. You cannot beat the power of face-to-face gatherings but we look forward to providing exciting interactive alternatives."