LONDON, July 24, 2020 /PRNewswire/ -- Rubik's Brand has now recruited over 125 official ambassadors from around the globe to promote the world's favourite puzzle. These Cube advocates range from education specialists, mosaic artists and magicians to speedcubers and athletes. 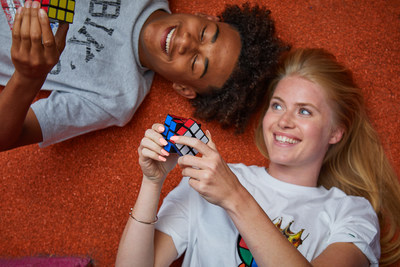 The USA-based You Can Do The Rubik's Cube ambassadors use the puzzle in their classroom for educational purposes, to help teach mathematical, engineering and design concepts. They believe in the power of creative problem-solving using the Cube and are advocates for its origin in science, technology, engineering, and mathematics (STEM).

The twisty Cube is known to be a brain teaser and respect is granted to those who complete it.  Cubing leagues have emerged around the world, with top 'speedcubers' competing to see who can solve it the fastest. The playful intelligence, creativity and colourful origin of the puzzle have also led to the Cube being used in fun and playful ways, such as through the creation of mosaics, art and magic tricks.

It is through these specialist skills that Rubik's has identified ambassadors who not only celebrate the vision of the brand, but advocate its educational, play and creative elements. Rubik's ambassadors connect with other cubers and potential puzzle-solvers through their own media channels, as well as through Rubik's channels. They are Rubik's most loyal and trusting fans who ultimately just love to play, be challenged and solve.

Recent new speedcubing ambassadors include Australia's Jack Cai, Canada's Bill Wang, Germany's twins Sebastian and Philipp Weyer, France's Juliette Sebastien, the USA's Keaton Ellis, Max park and Patrick Ponce and the UK's George Scholey. These speedcubers are some of the fastest in the world and have been promoting #FastFriday to appeal to a growing social media audience who are active on YouTube, Instagram, Twitter and TikTok.

In fact the American Max Park stars in a documentary film that is set to grip TV viewers worldwide when aired for the first time on Wednesday July 29 2020 in a new Netflix original documentary, The Speed Cubers.

The exciting new film follows the paths of Max Park and Feliks Zemdegs who compete in highly charged World Cubing Association championships. Max Park has autism, and the film provides a glimpse into his personal situation and how a six-sided Cube has changed his life and opened up friendships with fellow cubers.

Feliks Zemdegs, aged 24, from Melbourne, is the only speedcuber to ever win the World Cube Association championships twice and you see him battle with Max Park who is now just 18 years of age.

In The Speed Cubers film, Feliks Zemdegs says, "The first time I met Max was actually at the World Championships and he was very, very excited.  After he broke the 3x3 world record, I was like, 'Ah, really well done. You should be really proud'."  Rita Zemdegs, Feliks' mother says, "Clearly, they're rivals but they are friends."

Most of the dramatic action takes place during the July 2019 World Cube Association championships that took place in Melbourne, Australia.

Hayley Woodward, Head of Global Marketing at Rubik's Brand said, "Rubik's has supported the World Cubing Association championships for many years and I've been lucky enough to witness several competitions at first hand . This new film has been independently produced and its launch in the 40th anniversary year of the Rubik's Cube going global is pure serendipity.  What's great is that you don't have to be an elite speedcuber to enjoy the subject and it opens the minds of those considering the benefits of solving a Cube. We are thrilled because Max Park is an official ambassador to Rubik's and is now inspiring others to learn to Cube for the first time."

In 1980, the Rubik's Cube was officially introduced to the world. Now in its 40th anniversary year, nearly half a billion Cubes have been sold to date with 2020 set to be a breakthrough year with over 20 million Rubik's products expected to be sold globally.  Adding to the excitement of the anniversary, Rubik's has formed several partnerships to create brand new and unique Rubik's themed products outside of the usual games and puzzles. These include Etch-A-Sketch, The Op, Perplexus, DeKryptic and Marvin's Magic.

Where to watch the film: www.Netflix.com/TheSpeedCubers