This will help to assess the scale of threats to the Red Book animal and develop a detailed plan for its protection.

MOSCOW, July 30, 2020 /PRNewswire/ -- Starting from the 1-st of August, in the Arctic zone of the Russian Federation will be held test flight counting of polar bears. The expedition is organized within the framework of the project "Host of the Arctic", initiated by Federal service for supervision of natural resources of the Russian Federation (Ministry of Natural Resources and Environment) and International Environmental Fund "Clean seas", with participation of  "Arctic Initiatives" Foundation. 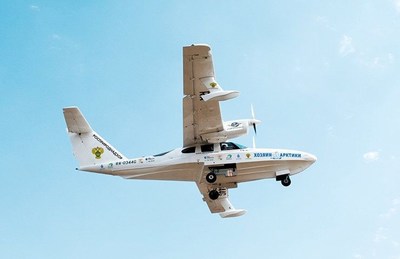 During the project implementation it is planned to explore the coastal areas from Yamal to Taimyr, to conduct trial flight counting of polar bears and marine mammals, and to assess the overall environmental situation in the Russian Arctic.

According to the head of Federal service for supervision of natural resources Svetlana Radionova, today there are several threats to the polar bear, including poaching, global warming and human economic activity.

The objectives of the project are:

The successful experience of the scientific research expedition of waters of the Black Sea countries called «Flights with dolphins», realized by the «Clean Seas» Foundation in 2019 will be used in the organization of the arctic expedition.

The polar bear will be counted by amphibious L-8 and L-42 aircrafts, as well as by unmanned aerial vehicles. The flight crew of the expedition will be commanded by Valery Tokarev. The total length of the scientific expedition route will be more than 10,000 km.

"It just so happened that the polar bear - majestic and graceful predator -  needs our help. Then who, if not us, with the available resources to study, support and protect the real Host of the Arctic? That is why this expedition is not just a scientific research event, but our duty to nature itself," concluded Vasily Bogoslovsky.

International Environmental Fund «Clean Seas» unites people who understand the ecological responsibility for the preservation of the water environment of our Planet. It was founded in 2009 in Moscow.

The Foundation's mission is to pay increased attention to solving environmental safety and responsibility problems — one of the main principles of a dynamically developing state.