SEOUL, South Korea, Sept. 4, 2020 /PRNewswire/ -- Eugene Baik, Head of Production at Yuyu Pharma (CEO Robert Wonsang Yu, KRX 000220), received the Presidential Commendation for contributions in leading the realization of gender equality employment. The award was given at the 2020 Gender Equality Award Ceremony held on the 31st at the Government's Seong Convention Center. 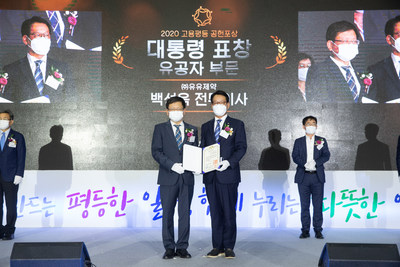 After joining Yuyu Pharma in 1983, Eugene Baik has worked at Yuyu's Production Site for over 37 years and was recognized for his contributions in furthering female employment, establishing a family-friendly and work-life balance culture, and preventing sexual harassment in the workplace

Currently, Yuyu Pharma's Jecheon Production workforce is comprised of more than 30% female employees and 40% of all recent hires were women. The percentage of females working at the manager-level has also risen twofold from 2017 to 2019. In addition, Yuyu's Production has adhered to the maternity protection system guaranteed by the Labor Standards Act for Benefits, such as pre-childbirth and post-childbirth maternity leave, infertility treatment leave, and family care leave. All employees who have gone on leave have returned to the same position.

"Eugene and our predecessors who have worked at Yuyu Pharma during its 80 year history laid the foundation for gender equality employment practices," said Robert Yu, CEO of Yuyu Pharma. "We aim to establish Yuyu as a company that people want to work. We will continue to implement our gender equality system by improving working conditions, and enhance the quality of life through fostering better work-life balance."