VALLETTA, Malta, Sept. 9, 2020 /PRNewswire/ -- Bradley C. Birkenfeld made international headlines as the linchpin in the most significant whistleblower case in financial history. He single-handedly exposed the world's largest wealth management firm (UBS) and its illegal recruitment, shady dealings, and secret sheltering of billions of U.S. dollars for some of the wealthiest, most powerful and influential tax-evaders in America. Birkenfeld's unprecedented actions, not only brought $25 billion back to the U.S. Treasury, but ultimately destroyed the centuries-old clandestine practices of the elusive Swiss banking system. 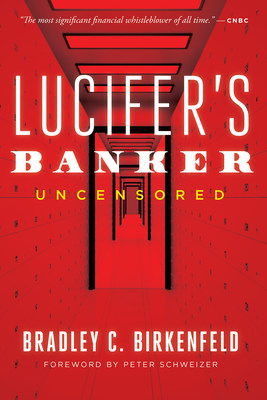 But, as the old saying goes, "No good deed goes unpunished", and after blowing the lid squarely off of illegal offshore banking, and presenting a gift-wrapped case to the U.S. Department of Justice, only Birkenfeld was sent to federal prison, as an attempt at silencing him to protect the names and identities of some of those in the highest positions of power who would be named. But Birkenfeld emerged after his thirty-month prison sentence, referring to himself as "a hammer looking for nails", more determined than ever. And as a reward for aiding in the vast recovery of money to the U.S. Treasury, he was awarded $104 million by the Internal Revenue Service — the largest payout of its kind in U.S. history.

In addition to Birkenfeld's original gripping story of secret offshore banking, providing readers the rare glimpse into the illicit world of the wealthy and powerful, and their acts of greed and malfeasance, NEW egregious revelations and evidence are presented which directly involve:

"Powerful economic and political forces who were profiting from the illegal schemes devised by Swiss banks, tried to prevent and gag this information from seeing the light of day," says Birkenfeld. And now with the release of "Lucifer's Banker UNCENSORED" (Republic Book Publishers, September 30) the full jaw-dropping story of just how far reaching the web of corruption extends makes this new, updated release a must-read during this crucial election year.

Visit www.lucifersbanker.com for more information and links to relevant news stories and content.