Given the current spike in mental health issues, post COVID-19, what are the alternatives available to the British people?

CAMBRIDGE, England, Sept. 24, 2020 /PRNewswire/ -- A survey of 2,000 British Adults has highlighted serious concerns about the increasing use of anti-depressants in our society. The study carried out by Lifeplus Europe Ltd. confirmed that high percentages disagreed with the increasing levels of prescriptions issued and the lack of discussion around alternative treatments.*

Prescriptions for anti-depressant drugs have more than doubled in the UK within a decade, statistics released by the NHS confirmed that more than 7 million people are now taking drugs which are not easy to withdraw from. (source)

The survey examined respondents' views on a variety of mental health issues, this includes the effect of social media, diet, exercise and social interaction.

7 in 10 Adults agree that anti-depressant drugs are too readily available with 86% saying that more mental health support should be available as an alternative to medication.

'It seems to me that in the UK it is widely-accepted to prescribe anti-depressants instead of trying actively to have therapy sessions with those who need them. There are so many ways in which depression can be healed before referring to chemicals. Of course, it is not an easy thing, but I think we should get rid of anti-depressants altogether" – respondent quote

4 in 5 of respondents believe that social media has played a significant part in the increase of depression across the country whilst a high majority, 83% agree that in some cases depression can be treated without anti-depressants.

"I am concerned at the current dependency and influence of social media and lack of scrutiny and editorial control.  Fake and malicious posting and impact in general on young people of utter reliance in modern technology" – respondent quote

"Personally, I believe social media is a large cause of depression, and therefore the need for anti-depressants in individuals. It creates unrealistic standards in regard to lifestyle which the average person is not able to achieve." – respondent quote.

"People tend to be self-obsessed these days, they expect life to be perfect and this is very rarely the case. Other people put on social media that their life is perfect, even though it isn't and raise gullible people's expectations beyond what is possible." – respondent quote.

Almost 9 in 10 (88%) agree that their mental wellbeing is as important to them as their physical health.

8 in 10 (81%) believe that poor diet can affect your mental health. A similar proportion (82%) agree that exercise has an important role in treating depression.

81% of adults believe that poor diet can significantly affect your mental health whilst more than 4 in 5 adults agreed that exercise has an important role to play in alternative treatment.

43% of those surveyed claimed to having personally suffered from mental health issues within their lifetime with over half (56%), stating that their close family or friends have been affected by these issues.

3 out of 4 people believe that there is not enough open and honest discussion about mental health with participants citing social media and increased pressure in society as a root cause.

"From my own personal experience what has personally helped me is having a healthy and balanced diet.  Incorporating plenty of fresh foods, fruits, vegs, seeds etc., avoiding fad diets and unhealthy processed foods and not worrying about counting calories, but having a sensible approach to health.  By not engaging in social media and the peer pressure that comes with it by trying to follow people and comparing yourself with others it is better for your mental health and self-awareness." – respondent quote.

*Lifeplus is presenting survey results. Lifeplus does not recommend changing your treatment plan without consulting your GP

39% Households with children
61% Household with no resident children 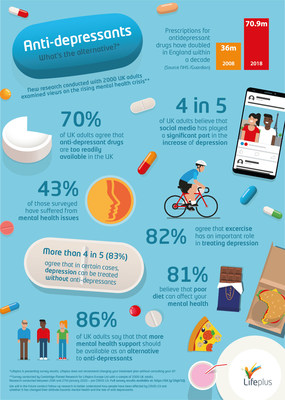