LONDON, Sept. 30, 2020 /PRNewswire/ -- In the 40th anniversary year of the Rubik's Cube becoming a global phenomenon, the brand is launching Rubik's Speed, perfect for those inspired to improve their solve time or the ultimate gift for those starting their solving journey. 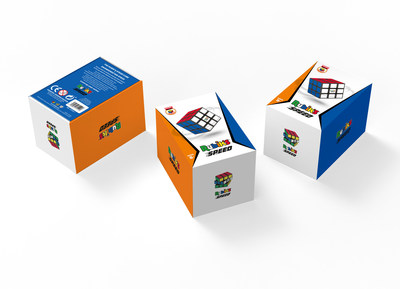 This new Rubik's Speed Cube now uses magnets to add stability and act as a positioning system to help align the Cube for the next twist, ensuring a smooth and fast turn. The Cube features an improved mechanism, making puzzle solving faster and effortless. It is set up to be played right out of the box, with lubricated tracks and a strong core, resulting in faster movements. The Cube has a sleek look and polished touch and carries the official Rubik's Speed logo.

The launch comes after the announcement of a team of Rubik's Speedcubing ambassadors, and the recently launched documentary on Netflix, called The Speed Cubers, which chronicled the build-up to the 2019 World Cubing Association Championship in Melbourne.

Christoph Bettin, CEO for Rubik's Brand, said, "This new launch is hot on the heels after our highly successful social media campaigns around #CubeAtHome which has seen over 24.9 million views across multiple platforms. Our research shows that people are taking a huge interest in solving the Cube and that there is a strong appetite for a fast-turning Cube.

We have a superb team of speedcubing ambassadors who are busy providing endless tips and advice around Cube solving to help people on their Cubing journey."

The next major speedcubing tournament is the Red Bull Rubik's Cube World Cup which aims to develop more opportunities and visibility for the cubing community.

In 1980, the Rubik's Cube was officially introduced to the world. Now in its 40th anniversary year, nearly half a billion Cubes have been sold to date with 2020 set to be a breakthrough year with over 20 million Rubik's products expected to be sold globally.  Adding to the excitement of the anniversary, Rubik's has formed several partnerships to create brand new and unique Rubik's themed products outside of the usual games and puzzles.  These include Etch-A-Sketch, The Op, Perplexus, DeKryptic and Marvin's Magic.

The new Rubik's Speed Cube is available now from the Rubiks.com website and the price is £19.99.

You Can Do The Rubik's Cube:  https://www.youcandothecube.com/