AMSTERDAM, Oct. 5, 2020 /PRNewswire/ -- NLR and NLR India hosted the official start of the innovative project 'Stop the Transmission of Leprosy!' on 2 October 2020. The study is launched in the online presence of the Health Directorate, Government of Uttar Pradesh, the two districts, representatives from universities and persons affected by leprosy. Together they commit their support to this multi-country, multi-partner collaborative research programme. The first dose of a new preventive treatment was given to close contacts of people affected by leprosy in the two study districts Chandauli and Fatehpur. 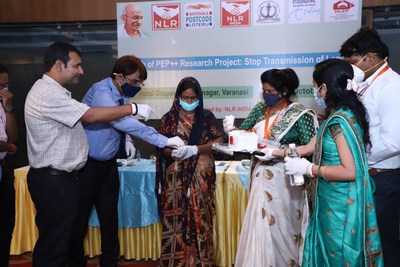 Every year over 200,000 people are diagnosed with leprosy worldwide, over 125,000 of whom are Indians. Leprosy is still a public health problem in many countries, even though a free cure has been available for four decades. After infection, symptoms can take as long as five years to appear. Meanwhile, individuals may carry and transmit the infection without realising it. Therefore, preventive treatment is needed to keep the disease from developing in infected individuals and stop transmission to others.

The Stop the Transmission of Leprosy! Project

The Stop the Transmission of Leprosy! Project, focuses on early detection of leprosy and preventive treatment of people who have frequent and close contact with persons affected by leprosy. The project aims to reach a total of around 800,000+ contacts of persons already diagnosed with leprosy in India, Indonesia and Brazil. Of all new leprosy patients, 80% occur in these three countries together. The project is funded by the Dutch Postcode Lottery through its Dream Fund. Duane Hinders, Programme Manager NLR, emphasizes the importance: "We are fighting an age-old infectious disease in high-endemic regions in the middle of this COVID-19 pandemic, which is also very much present in the districts we operate in. It is critical to take advantage of the heightened awareness of public health among persons in these communities to reduce both conditions."

The project, designed by NLR in collaboration with national stakeholders, aims to stop the transmission of leprosy by using a package of innovative tools and best practices. Among them, enhanced preventive medication, called PEP++. The medication will be administered to a random sample of close contacts in multiple doses. These people are more likely to harbour a higher number of leprosy bacilli than the general population or may be infected without any visible symptoms yet.

The current preventive regimen, called SDR-PEP, reduces the risk of leprosy among contacts of new patients by 57%. With the new PEP++ regimen, contacts will receive three doses with a combination of rifampicin and clarithromycin. With this, it is expected that the treatment will be 80-90% effective resulting in a drop of annual new patients within project areas by 50% at the end of the five-year project.

In each country, two high-endemic districts or municipalities have been selected. In these districts, mapping of the population at risk of contracting leprosy and perception studies about attitudes and practices towards the disease have already been conducted. In India these are Chandauli and Fatehpur in Uttar Pradesh state. The first contacts will start the new preventive treatment soon after the launch meeting. To reflect on this unique moment, on October 2 2020, in Chandauli and Fatehpur, we celebrate the starting point of what we expect to be a successful strategy to end leprosy transmission. "In its quest to contribute to achieve zero leprosy transmission, NLR is happy to conduct the multi-country PEP++ study in partnership with a wide range of governmental, university and social stakeholders in India," says Mr. Jan van Berkel (CEO NLR).

NLR: until No Leprosy Remains

NLR takes pride in enabling research and driving evidence-based innovation to achieve zero transmission, zero disability and zero discrimination due to leprosy. We are known as an organisation that is passionate about ending leprosy and keeps going until breakthroughs are ready to be implemented. NLR is transitioning into an alliance with independent offices in India, Mozambique, Indonesia, Brazil, Nepal and the Netherlands. A worldwide total of 200 employees work together to achieve our shared mission to stop leprosy. We continue our efforts until No Leprosy Remains.