Artmarket.com and Artprice announce the forthcoming publication of an exclusive report on the Contemporary Art Market (2000-2020) to assuage the cancellation of the Frieze in London and the FIAC in Paris

Artmarket.com and Artprice announce the forthcoming publication of an exclusive report on the Contemporary Art Market (2000-2020) to assuage the cancellation of the Frieze in London and the FIAC in Paris

PARIS, Oct. 6, 2020 /PRNewswire/ -- Over the past twenty years the exchange of Contemporary art works has developed into a dynamic global market. In its upcoming publication, Artprice traces and analyzes this evolution, from its rapid acceleration culminating in Damien Hirst's incredible sale at Sotheby's in September 2008 the day Lehmann Brothers collapsed, then its vigorous recovery with the boom in Chinese Contemporary art driving the market until 2014, followed by a period of relatively measured growth… and suddenly interrupted in March 2020, by the unprecedented global health crisis we are now experiencing. 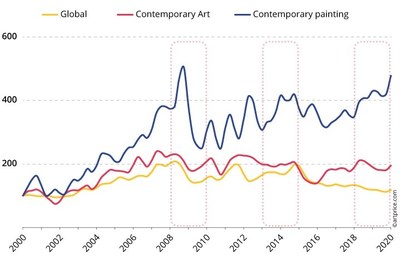 According to thierry Ehrmann, President and Founder of Artmarket.com and its Artprice Department. "Contemporary Art began this century as a 'niche market' but is now the motor of the entire art market. Our latest report deciphers this radical transformation over the twenty-year period since 2000".

To side-step the problem of an 'incomparable' year (our Contemporary Art Market Reports usually cover the previous 12-month period...) our next publication will provide an overview of the Contemporary art secondary market between 2000 and 2020. A few days ahead of the scheduled publication of this historical overview, Artprice looks at three specific 'moments' in this 20-year period which punctuated the Contemporary art market's rapid development at the beginning of the 21st century.

The months that preceded the 2008 financial crisis were among the most profitable in Contemporary art market history – no doubt a little too profitable – with astounding results for controversial works and controversial sales.

In the spring of 2008, New York art auctions hammered $15.2 million for Takashi Murakami's My Lonesome Cowboy (1998), a larger than life sculpture of a boy proudly ejaculating. Then in June, Jeff Koons' Balloon Flower (1995/2000) sold for $25.8 million. And then later in September, just a few hours after news broke of Lehman Brothers' collapse in New York, Damien Hirst and Sotheby's hosted a London sale titled Beautiful Inside My Head Forever. Despite the financial context, Hirst managed to sell animal corpses immersed in formalin, The Golden Calf (2008) and The Kingdom (2008), for $18.6 million and $17.2 million respectively.

Five years later… The major stars of Chinese Contemporary art, which had already gained momentum before the financial crisis of 2008, finally began to assert themselves on the global art market. Artists like Luo Zhongli, He Jiaying and Ai Xuan all posted their best annual auction performances in 2013. Zeng Fanzhi was even the second-most successful Contemporary artist at auction after Jean-Michel Basquiat with his turnover exceeding $100 million (incl.fees), notably thanks to a historic record of $23.3 million for his The Last Supper (2001). Since then, no work by Zeng Fanzhi has fetched such a high price.

The period was also marked by another phenomenon, quite different, that the journalist Scott Reyburn described in the New York Times in September 2015: "In 2014, recently made works by young abstract painters like Oscar Murillo, Lucien Smith, Alex Israel, Mark Flood and Christian Rosa were being "flipped" at auction for eye-watering multiples of the artists' original gallery prices. But in the last six months or so, this very volatile sector of the market […] has undergone a correction ".

In the years that followed, the market for artists under 35 became much more stable. While some of the young superstars of 2014 remained relatively strong in the secondary market, there have been many changes in the auction turnover rankings of artists of this generation.

Between 2015 and 2019, the Contemporary art market experienced five years of continuous volume growth (number of lots sold). After a historic auction record of more than $110 million for a painting by Jean-Michel Basquiat in 2017, the market recorded two very solid years, without any headline-grabbing results, but maintaining a steady and reassuring level of growth.

In 2008, when the Contemporary art market was hit by the financial crisis, it was already in very feverish state, with numerous controversial results. Fortunately, the Covid crisis has interrupted a much wiser and more stable market. Lots of sales have had to be canceled or postponed since March 2020, but artists' price levels (and the prices of their works) could well, in general, traverse this crisis without taking too much of hit.

The current 'interruption' is an opportunity for the market to take a step back from certain enthusiasms that were beginning to boil over, notably those for Kaws and Liu Ye. It is certainly preferable that the sharp shock to the Contemporary art market occurred in March 2020 when it was in full confidence and when most artists' price indices were climbing gradually, than in a period of major volatility.

Contact Artprice's Econometrics Department for your questions relating to our indices and statistics, as well as for our Personalized Study Services: econometrics@artprice.com

Discover Artmarket and its Artprice department on video: https://en.artprice.com/video

See certified biography in Who's who ©:

Artmarket is a global player in the Art Market with, among other structures, its Artprice department, world leader in the accumulation, management and exploitation of historical and current art market information in databanks containing over 30 million indices and auction results, covering more than 740,000 artists.

Artprice Images® allows unlimited access to the largest Art Market image bank in the world: no less than 180 million digital images of photographs or engraved reproductions of artworks from 1700 to the present day, commented by our art historians.

Artmarket with its Artprice department accumulates data on a permanent basis from 6300 Auction Houses and produces key Art Market information for the main press and media agencies (7,200 publications). Its 4.5 million 'members log in' users have access to ads posted by other members, a network that today represents the leading Global Standardized Marketplace® to buy and sell artworks at a fixed or bid price (auctions regulated by paragraphs 2 and 3 of Article L 321.3 of France's Commercial Code).

Artmarket with its Artprice department, has been awarded the State label "Innovative Company" by the Public Investment Bank (BPI) (for the second time in November 2018 for a new period of 3 years) which is supporting the company in its project to consolidate its position as a global player in the market art.

Index of press releases posted by Artmarket with its Artprice department:

Discover the alchemy and universe of Artmarket and its artprice department http://web.artprice.com/video headquartered at the famous Organe Contemporary Art Museum "The Abode of Chaos" (dixit The New York Times): https://issuu.com/demeureduchaos/docs/demeureduchaos-abodeofchaos-opus-ix-1999-2013

L'Obs - The Museum of the Future: https://youtu.be/29LXBPJrs-o