TAIPEI, Oct. 13, 2020 /PRNewswire/ -- "The Ministry of Culture of Taiwan" kicked off the 11th Golden Comic Awards at the Taipei New Horizon Building on September 28. The MOC presented six awards, among them, the Grand Prize and a NT$500,000 purse. These were granted to Nobi Chang for Time Swirl. 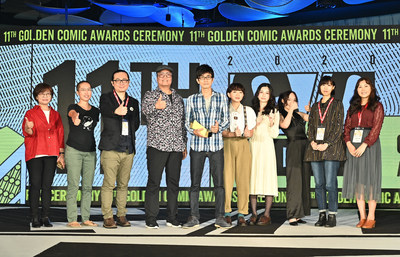 The MOC made major changes to the GCAs this year, by breaking with past practice of basing awards on categories, including. The MOC stated that this allowed it to better reflect the growing diversity of themes and styles in Taiwan's comics. The number of entrants jumped 74 percent over last year, over half recipients of assistance from the Comics Guidance Fund. Many works showed efforts at cross-promotion, which shows that the font of creativity in Taiwan's comics is boundless.

The Special Contribution Award this year was won by veteran comic artist Loic Hsiao, one of Taiwan's four living legends of comics. He has also been called the comic least committed to his career given his propensity to branch out into other areas. Among his popular collections are Short: Fairy Tales Untold and Here Come the Smarties. His latest artistic effort represents a major creative breakthrough. It is a series of calligraphic paintings entitled "Sword and Finger School," that combines Chinese martial arts movement with Zen concepts. Upon receiving the award, Hsiao said, "I've never thought I could win this, but I don't feel guilty for winning. I will continue to stand on the frontlines of comics, and work for the art to my last breath."

The award ceremony will be broadcast at 11 p.m. on October 16 by Taiwan Television Enterprise. Comics fans are invited to share in this joyful event and show their support for the idealism shown by comic creators and everyone involved in their creation. The international exchange activities traditionally held with the GCAs have been transformed because of COVID-19 into a special exhibition and related events highlighting the symbiotic relationship between comics and cities and how Taiwan's scenic spots have featured in comics. Fans are welcome to visit the exhibit, which continues through 7 p.m. September 29 at Warehouse 4 in the Songshan Cultural and Creative Park.