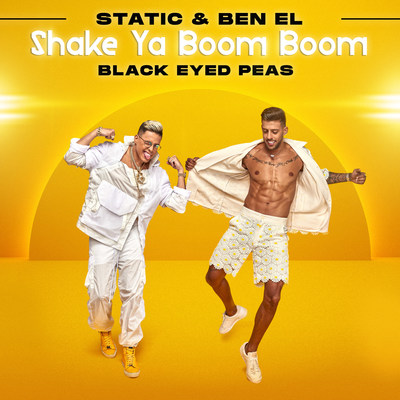 "Shake Ya Boom Boom" features a combination of singing and rapping by Static & Ben El and will.i.am, with a synergy of classic club beats and energetic up-tempo sounds. The music video was shot in a vertical/smart-phone style with TikTok, YouTube, and Boomerang Instagram clips of Static & Ben El, members of Black Eyed Peas, and several Social Media influencers grooving to the beat and lip-syncing the catchy chorus, "Don't need words when you move like that/Shake ya boom boom boom boom like that." All with a combined total reach of 50M fans!

Black Eyed Peas recently delivered a show-stopping performance at the 2020 MTV Video Music Awards, closing the show with hits "VIDA LOCA" and "I Gotta Feeling."  The band has released eight studio albums, including Translation, which launched June 19 of this year.  They currently have over 8.5 million subscribers on YouTube, with more than 116 million views, and over 39 million followers on Facebook.

"Further Up (Na, Na, Na, Na, Na)," the duo's number one English language track,  has made waves across the globe, introducing Static & Ben El to audiences in new markets like Canada, Germany, Italy, and Turkey.  The song has been featured on numerous television programs, including Good Morning America and Live! With Kelly & Ryan. It was also featured in the Netflix original film "Work It" and the launch spot for N.B.C.'s streaming platform N.B.C. Peacock! The music video for the July 2020 release "Milli," featuring Flipp Dinero, currently has over 5 million views on YouTube.

Static & Ben El made a name for themselves in Israel, where the singers became the country's number one duo, earning ACUM awards in 2017 for Song of the Year, Band of the Year, and Breakthrough Artist of the Year.  The duo delivers over 200 performances each year and boast over 569 million views collectively on their YouTube channel.  Static & Ben El have over 1 million combined followers on Instagram, over 863,000 subscribers on YouTube, and over 320,000 combined followers on TikTok.

Static and Ben El is Israel's No. 1 duo. These superstars don't rest, with back-to-back live performances and travel to and from the U.S. to create new music alongside top producers. The pair are 2017 ACUM winners for Song of the Year, Band of the Year, and Breakthrough Artist of the Year. They've also been regular judges for the popular televised Eurovision singing competition in Tel Aviv. This year, the duo released the single "Further Up (Na, Na, Na, Na, Na)," in collaboration with Pitbull. Additional collaborations are currently in the works with Lil Baby and Snoop Dog, assuring staying power on the charts.

With every move, Black Eyed Peas dictate the rhythm of culture. Over the past 25 years, the Los Angeles trio—will.i.am, apl.de.ap, and taboo-- have cemented as one of the era's biggest acts, having moved over 3 million tickets, performing 300-plus shows throughout 30 different countries, and named "the second-best-selling artist/group of all-time for downloaded tracks," according to Nielsen, and landed on Billboard's "Hot 100 Artists of the Decade." Now, they've taken over airwaves in the new era of Latin influence with hit tracks "RITMO" alongside J Balvin and "MAMACITA" featuring Ozuna.

Saban Music Group LLC (SMG) is a global music entertainment company based in Los Angeles, California. SMG was founded in 2019 by Haim Saban, Chairman and Chief Executive Officer of Saban Capital Group LLC and a worldwide pioneer and leader in the entertainment industry. SMG captures the globalization of music by identifying, signing, and developing artists with international appeal. This year, SMG announced a global distribution and marketing agreement with Universal Music Group (UMG), the world leader in music-based entertainment.