LONDON, Nov. 5, 2020 /PRNewswire/ -- In 1980, when the puzzle created by Hungarian Professor Ernő Rubik changed its name to one bearing the inventor's surname, no-one could have foreseen the incredible success that would follow. 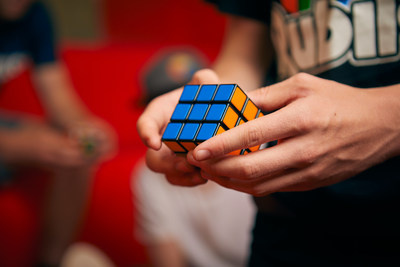 Today, 40 years on from the global launch of a puzzle that Rubik originally created to help his architectural students understand design, the Rubik's Cube is widely acknowledged to be not only the world's most popular puzzle of all time, but the best-selling one too. Over the last four decades, 450 million Cubes have sold everywhere across the globe. Indeed, it's estimated that one in seven of the world's population – astoundingly over one billion people – have played with a Rubik's Cube at some point.

The simple Cube, with nine squares of six different colours (white, yellow, orange, red, green, blue), has gone on to become one of the most recognisable artefacts of our times – a true pop culture icon.

It has not only featured in the music videos of Jennifer Lopez and Taylor Swift, appeared in a variety of TV shows, including Stranger Things, Killing Eve, and The Simpsons, and the films Toy Story 4, WALL-E and Armageddon, it also has pride of place as a permanent exhibit in New York's Museum of Modern Art. The basketball player Kobe Bryant was immortalised in a Rubik's Cube mosaic. Will Smith, Justin Bieber and Olympic gold-winning cyclist Mark Cavendish are all fans. The Cube was at the centre of a recent Netflix documentary, The Speed Cubers, featuring two of the world's fastest cubers – Max Park and Feliks Zemdegs.

Not bad going for something originally created behind the Iron Curtain by a man whose magical outlook on life can be best expressed in his words, "If you are curious, you will find the puzzles around you. If you are determined, you will solve them."

The culmination of the 40th anniversary of the Rubik's Cube becoming a worldwide phenomenon is set to climax with the first staging of the digital Red Bull Rubik's Cube World Cup this Saturday (7 November 2020), following two previous years where finalists could compete face-to-face.

Utilising the new digital Rubik's Connected Cube, the final will feature the winners of a series of local and national digital qualifiers, plus the champions from the 2019 season - including Max Park (USA), Juliette Sebastian (France) and the Weyer Brothers, Sebastian and Philipp (Germany), who have been awarded a wildcard.

Christoph Bettin, the Rubik's Brand CEO, said the new Connected Cube was a natural progression in the evolution of Rubik's, given more time spent online in the wake of the COVID-19 pandemic. He said, "The very exciting element is that this Connected Cube will encourage cubers to interact with others from around the world, starting with the first ever digital speedcubing competition, in the form of the Red Bull Rubik's Cube World Cup. And we mustn't forget that you will also be challenged to improve your aptitude in science, technology, engineering and maths."

Indeed, the Rubik's brand has proved itself once more during this challenging year. Over the course of 2020, a number of Rubik's ambassadors have broadcast to the Rubik's social channels in an attempt to inspire and teach people all about the solve.  A new Rubik's Speed Cube has also been launched, engineered for faster solves.

Christoph Bettin said, "We soon learned at the start of the lockdown that solving interest was at an all-time high by those choosing to occupy their time with learning a new skill.  Very quickly, the term #CubeAtHome was seen by over 27 million people on the TikTok channel.  This spread to other social media platforms with Rubik's being celebrated in over 50 million different digital posts from Instagram to YouTube in September 2020 alone.

"We amplified social channel interest with a new campaign called 'Adventure Every Turn', which encouraged Cube fans to view solution guides and enjoy the challenge of unravelling a scrambled Cube. This message was amplified by a team of Rubik's Ambassadors who produced content viewed over 500 million times so far in 2020."

The Cube's inventor Ernő Rubik has even written a critically acclaimed book about the puzzle, called 'Cubed – the Puzzle of us all', which was launched in the USA and throughout Europe in September 2020.

So, as the 40th anniversary celebrations come to an end, it's unsurprising that a new generation of Cubers – not yet born when Ideal Toy began mass distribution in 1980 – have taken to the brand.

Christoph Bettin concludes: "What's very exciting is we are becoming a lifestyle brand with geeks, hipsters, kids and retro-fans to name a few. Rubik's offers something for everyone!  And what could be a better way to end the year than with the Beyond Rubik's Cube exhibition at the Liberty Science Center in New Jersey, USA, which runs until April 2021?"