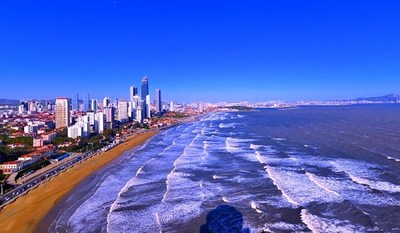 Surrounded by the mountains and the sea, Yantai in East China's Shandong province is blessed with a picturesque landscape and four seasons. It is a vibrant and beautiful coastal city with a livable environment.

"I really like the ocean air where it gets kind of foggy in the morning," said Nelly Min from the United States during her trip to Yantai.

Nine foreign visitors were given a chance to experience the coastal city and visit famous sites like Yantai Mountain and the Yantai marine ranch during the Explore Yantai Online through the Eyes of Foreigners event from Oct 27 to 28.

"The vibe here is very relaxed. The beach town is something that I'm familiar with because I grew up in Los Angeles near the beach," Nelly said.

According to statistics from the Yantai municipal cultural and tourism bureau, the city received over 86 million tourists from home and abroad in 2019. Its total tourism consumption exceeded 120 billion yuan ($17.83 billion), accounting for 15.8 percent of its GDP.

The booming development of leisure fisheries has also paved a new way for the city to promote marine tourism.

The intelligent platform integrates artificial intelligence, clean energy, 5G communications, big data, and underwater patrol robots. It is the first of its kind in China.

The marine ranch complex can accommodate 50,000 tourists every year.

Yantai currently operates nearly 73,333 hectares of marine ranches with an industrial chain output value of more than 50 billion yuan, according to data from the Yantai municipal marine development and fisheries bureau.

Despite the impact of the COVID-19 pandemic, the city's tourism industry has gradually recovered due to the local government's efforts in epidemic prevention and control, including the distribution of consumption coupons, implementation of online booking and limiting visitor flows.

Official data shows that the city received a total of 6.55 million tourists, generating a revenue of 7.6 billion yuan during this year's 8-day National Day holiday, a year-on-year recovery of 85.5 percent and 82.51 percent respectively, indicating a strong pickup in the city's tourism.

Looking ahead, the local government will expand its tourism market to attract visitors in neighboring countries such as Japan, South Korea, Singapore and Indonesia.

The first tourism promotion center was established in Khabarovsk, Russia in 2018.