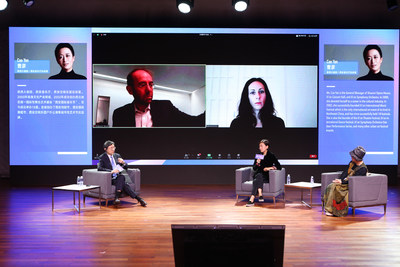 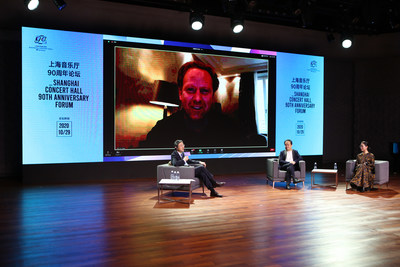 As a part of the celebratory events to mark the Shanghai Music Hall's 90th anniversary, the forum is composed of various sessions including keynote speeches, panel discussions, partnership agreement signing-ceremony on the cloud, and online programme showcasing. In 2020, Shanghai Concert Hall embraces its 90th anniversary by exploring the future of historically important art venues, and reflecting upon the "restart" of the performing arts industry in the post-COVID era.

The sudden strike of the COVID-19 pandemic in 2020 has posed great threats to people's lives, and brought unprecedented challenges to the global theatre and performing arts industry. This has in turn urged theatre professionals to remain resilient and explore new paths forward.

In the morning session of Shanghai Concert Hall's 90th Anniversary Forum, FANG Jing, General Manager of Shanghai Concert Hall, Tsuyoshi Tsutsumi, President of the Suntory Hall (Japan), Craig Hassall, CEO of the Royal Albert Hall (UK), along with Yvonne Tham, CEO of Esplande -Theatres on the Bay (Singapore) have delivered keynote speeches to address the challenges faced by the performing arts industry and share insights on the future development of music halls, based on their experience of fighting the pandemic at their respective organizations.

Tsuyoshi Tsutsumi, cellist and President of the Suntory Concert Hall in Japan, says in his keynote speech: " Through this pandemic, Suntory Hall has realized that online performances brought us closer to the world via the internet despite the virus has forced us to get social distance from each other. We have discovered a new possibility to reach prospective audiences even outside of the hall - that should be considered as a giant step in our history."

Due to pandemic, the Royal Albert Hall is closed for the first time since the second World War. In his keynote speech, Craig Hassall, the Hall's CEO, says that after the closure, the Royal Albert Hall has launched new programs such as Royal Albert Home as part of its digitalization efforts. At the same time, in order to adapt to the new normal of the performing arts industry, the Hall has taken strict measures to make itself a certified COVID-ready venue. Mr. Hassall says that "faced with the challenges in 2020, we all need to think of new ways to stage concerts and events, and look beyond our own countries to explore more possibilities of digital participation".

Yvonne Tham, CEO of Esplanade - Theatres of the Bay (Singapore), attends the forum online from the Esplanade's Concert Hall, and shares in the keynote speech her belief in international collaboration: "in a time like a global pandemic, we have not only looked inward but it has reinforced the importance of maintaining networks, maintaining collaboration on the international front." She also shares Esplanade's new attempts to digitize performances during the pandemic, as well as the launch of the "Esplanade Academy", which delivers training programs in technical production and helps expand opportunities for people to experience live music in new ways.

In the keynote speech, Fang Jing says that during the pandemic Shanghai Concert Hall has always remained true to its mission by searching for new ways to usher in new opportunities: "We have been making lots of new attempts, not only in creating innovative works that deliver the value of art, but also in better shouldering our social responsibility and sharing art in unprecedented ways."

Through SNS and live-streaming platforms, Shanghai Concert Hall has been engaging with its audiences via online live performances and events as a "Concert Hall on the Cloud". Those ground-breaking efforts aim to facilitate innovative collaborations, and deliver art's value in the new times. Shanghai Concert Hall has been working on shifting its role from being a regular concert venue to becoming a smart theatre and a more versatile space for art.

The Forum also features two panel sessions in the afternoon. The first discussion is on "The New Normal of Performing Arts created by Art+Technology". Zhang Xiaoding, General Manager of Shanghai Grand Theatre and Cao Yan, General Manager of Shaanxi Opera House/ Xian Concert Hall discuss with Barbara Lebitsch, Director of Artistic Planning at the Elbphilharmonie and Emmanuel Hondré, Director of the Concerts Department of the Philharmonie de Paris / Cité de la musique, new directions and possibilities of the fusion of theatre development and technology.

During the Forum, Shanghai Concert Hall has also signed strategic partnership agreements online with the Royal Albert Hall and the Royal Welsh College of Music & Drama. The Royal Albert Hall is one of the world's most famous concert halls, as well as the busiest one with diverse programmes. The Dora Stoutzker Hall at the Royal Welsh College of Music & Drama is Wales' first Purpose Built Chamber Concert Hall; well known for its acoustics, the Hall is a regular venue of the BBC Cardiff Singer of the World Competition and its masterclasses. In the future, the three parties will work together on the basis of mutual respect and reciprocity, share experience and broaden cooperation by leveraging each other's strengths in the fields of business operations, arts education, online/offline program exchange and nurturing young artists. At the same time, the three parties have also been in touch with other renowned performing arts organizations around the world including the Lincoln Center in the United States, Sydney Opera House in Australia and La Seine Musicale in France to discuss further details of forging new ties in years beyond the pandemic.

After the online signing, Shanghai Concert Hall has showcased its first commissioned work The Tune of Water, as a highlight of the Hall's crossover-brand-cooperation project "Music ∞"(Music Infinity). The piece premiered at Shanghai Concert Hall in 2018, and was invited to perform at the "Chinese Spring Festival" at Beijing Tianqiao Performing Arts Center in 2019 - in the same year, it was listed among the national five "Outstanding Programmes Focusing on China" by the country's Ministry of Culture and Tourism, and was showcased at the Festival OFF d'Avignon in France in July. Since its premiere, it has been well received by both domestic and international media and audiences. With its showcasing as the final agenda item of the Forum, The Tune of Water channels ethnical rituals into the contemporary times via theatre, sharing with the audiences the charm of arts.