Available for purchase on November 10, The Sweater contains a biopolymer fabric called Brewed Protein that's made through a microbial fermentation process that utilizes plant-based feedstock

TOKYO, Nov. 10, 2020 /PRNewswire/ -- Fast fashion is among the leading contributors to climate change and one of the most ravenous industrial consumers of natural resources. It accounts for 8% of total greenhouse gas emissions globally [source], and, according to researchers' most recent estimates, generated 1.2 billion tons of greenhouse gas emissions in 2016—more than all international flights and maritime freighter trips combined [source].

On top of that, the fabrics predominantly used in fast fashion—polyester, nylon and other synthetics —are petroleum-based and shed microplastics, making them harmful to the environment and poorly suited for use as sustainable materials. Cotton, another commonly used fiber, is one of the most water-intensive crops in the world. All of this points to the conclusion that most traditional methods of clothing manufacturing are unsustainable, and clothing brands must take responsibility and do more to innovate and pivot towards more environmentally conscious materials and production methods.

Today, international technical apparel brand, Goldwin, and biomaterial innovator, Spiber, announce the latest product of their partnership. Called simply The Sweater, it's the world's first knitted garment made with Brewed Protein™️, a biopolymer whose plant-based microbial fermentation process makes it well-positioned to deliver significant contributions to animal- and plastic-free initiatives in a range of fields and industries.

The Sweater is a milestone in Goldwin and Spiber's shared mission to reduce the fashion industry's impact on the environment by replacing traditional, petrochemical-based materials and production methods with innovative, biobased solutions. 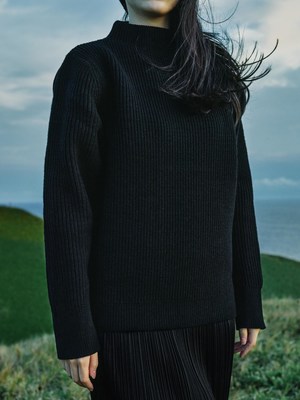 The Sweater is a highly exclusive item that will be produced in limited quantities. From November 9, 8 am EST to November 29, 12 am EST, anyone in 11 countries (Japan, US, Germany, Denmark, France, Italy, Portugal, Spain, UK, Sweden, and the Netherlands) can enter an online lottery system that will determine who receives the opportunity to purchase The Sweater. On November 30, 2020, winners will be selected randomly and notified via email of their eligibility to purchase The Sweater. Beginning on December 25, 2020, The Sweater will be shipped to those in the 11 countries who purchased it.

The Sweater is Goldwin and Spiber's first Brewed Protein™️ garment brought to market in the US. In 2019, The North Face Japan, which is operated by Goldwin Inc., collaborated with Spiber to release the MOON PARKA, the world's first outerwear jacket featuring microbially-produced fabric. Designed primarily as a conceptual garment, the parka was available for sale only in Japan and was produced in highly limited quantities. Goldwin and Spiber's partnership began in 2015, but The Sweater marks the beginning of a new phase in the partnership, which the companies call "Vision Quest," a project that unites partners around the world in the quest for a better future.

"Mankind has continued to evolve the sweater via the use of technology and knowledge throughout history and it is now essential winter wear," says Takao Watanabe, Goldwin's Head of Development. "The sweater has remained loved by many and its design has also remained largely unchanged since the original sweater first came into existence. The reason why it has played such a big role in the cultures and histories of people all over the world is due to the diverse and versatile animal fibers and the sweater knits that use these to their full potential. The Sweater was devised while probing the origins of the supposed original form of these sweaters and what of this will persist into the future. Furthermore, black is a color that is made by mixing all other colors and is also said to be the original color. These sweaters that have been with us from the beginning will lead us to the future through modern-day technology. This single black piece of apparel that signifies both the past and the future."

Goldwin is an international technical apparel brand whose purpose is to unify minimalist urban design with technical alpine performance. Its products, ranging from high performance skiwear, lifestyle apparel, activewear, and outdoor apparel, follow a distinct design philosophy that emphasizes thoughtfulness and an uncompromising attention to detail. Goldwin has refined its uniquely Japanese approach to design over a history that spans more than 70 years and has taken the brand to international heights, including affiliation with the Swedish and British national ski teams. Goldwin has flagship retail stores in the US, Japan, and Germany; its products can also be found online at goldwin-sports.com/us/. To learn more, follow Goldwin on Instagram at @goldwin_official.

Produced through a microbial fermentation process which utilises plant-based materials such as sugars as its primary resource, Brewed Protein™ materials are well-positioned to contribute significantly to animal-free and plastic-free initiatives in a range of fields, such as the apparel and automotive industries.

Spiber is currently engaged in numerous initiatives to scale up production of its polymers, with construction of its first overseas plant currently underway in Thailand. Scheduled to begin commercial operation in 2021, the plant is anticipated to be the largest structural protein mass-production facility in the world. In October 2020, Spiber also announced a partnership with Archer-Daniels-Midland Company, the world's premier agricultural origination and processing company, towards mass-production of Brewed Protein™ polymers in the US.