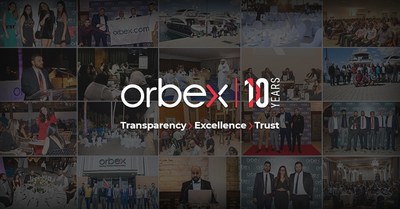 The commemorative event occurred on October 17th, 2020 in Limassol, Cyprus, the town the company has called home since its inception in 2010.

The evening brought together members of the HQ staff, Orbex business partners as well as his excellency the Mayor of Limassol and various members of the Limassol Municipality.

The 10-year anniversary was not the only milestone being celebrated, however.

The company also continued its 10-year streak of a 100% clean regulatory record under the strict European authority CySEC.

"It is a testament to the values that Orbex is founded on that the company has maintained a decade of strict adherence to the rules of our nation's highest regulatory authority. I am proud today to celebrate this occasion with a local company that leads by example," said Limassol Mayor Nicos Nicolaides.

The anniversary comes just one year after Orbex secured its FSC license under Orbex Global Ltd. The new license expands the company's ability to geographically serve more countries across the globe. It also raises the available leverage for those eligible to trade with the Mauritius-based Orbex entity.

"When I started Orbex in 2010, I wanted to establish a financial services firm that was known first and foremost for its ethics and transparency. Now, one full decade later, I am beyond proud of the reputation we have built and the loyal community of traders we have created," said Orbex Chairman Abdullah Abbas.

This event also celebrated the company bringing home the title of Best Forex Broker 2020 MENA & EU. This was awarded earlier in the year by Global Banking and Finance Review.

"I stand here today humbled by many things; by the hard work and dedication of the Orbex team, by the successes that we have achieved, and by the bright future I see for our brand in the years to come. I am beyond excited to enter this new decade, more passionate and dedicated to serve traders responsibly than ever," Abbas Added.

Orbex Limited is an award-winning global forex broker, fully licensed and regulated by CySEC. Headquartered in Limassol, Cyprus, Orbex specializes in the provision of access to the world's largest and most liquid financial markets.

Orbex Global Limited is fully licensed and regulated by FSC Mauritius and headquartered in Ebene, Mauritius.

The companies offer multiple asset trading including forex, indices, commodities and metals. With a focus on research, analysis and enhanced security of client funds, Orbex upholds a reputation of seasoned expertise within the industry.