SANYA, China, Nov. 17, 2020 /PRNewswire/ -- From Nov. 12 to 13, 2020, "Beautiful Sanya Lishan Distillery Cup" Beach Handball Invitational 2020 organized by SABGOC was held in Sanya. Anhui women's team and Shandong men's team won the championship in the match. The beach handball competition was divided into men's and women's groups from Anhui, Jiangsu, Shandong and some other regions in China. 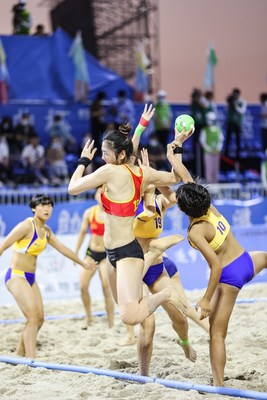 Shandong beat Anhui 2-0 to win the men's team title at the 2020 Sanya Beach Handball Invitational Tournament here on last Friday. Anhui attacked fiercely at the beginning of the match, while Shandong used defensive counterattacking tactics, with the goalkeeper scoring directly when the Anhui players did not come to the defensive positions. The two teams played hard in the second half, Anhui was one point behind Shandong at the last second of the match, but Wang Wenjun did not score in the following free kick for Anhui. "We won mainly in teamwork and defence, and we showed our usual training level today," said Sun Haonan, a player for Shandong.

In the women's event, Anhui beat the Chinese young women's national team 2-0 to win the title. The Anhui women's team, which has many national team players, with an average age of 22, won the match easily with their height and experience. Cheng Qiao, deputy secretary general of the Chinese Handball Association, said that beach handball is entertaining for audience due to the athletes' fancy shooting skills such as the 360-degree twist in the air in pursuit of two points.

According to Zhou Jun, Vice Mayor of Sanya City, the "Beautiful Sanya 2020" competition series is designed as a practice run for the working process of The Games. The Sixth Asian Beach Games Sanya 2020 Organising Committee will spare no effort to ensure the operation of the invitational while carefully adhering to epidemic prevention and control.