VANCOUVER, BC, Dec. 15, 2020 /PRNewswire/ -- Surge Copper Corp. (TSXV: SURG) ("Surge" or the "Company") has entered into a definitive option agreement (the "Option Agreement") with Thompson Creek Metals Company Inc., a wholly owned subsidiary of Centerra Gold Inc., a TSX listed Company ("Centerra") whereby Surge will have the right to acquire a 70% interest in the Berg copper-molybdenum-silver project through issuing C$5 million in common shares of Surge and C$8 million in spending commitments, in each case, over a period of up to five years. Berg hosts a large porphyry copper-molybdenum-silver deposit located in the Tahtsa Ranges in central British Columbia.  The main deposit at Berg is located approximately 28km northwest of Surge's Ootsa project on a 34,798 hectare tenement package which is contiguous with the Ootsa property. Berg is currently 100% owned by Centerra.

Dr. Shane Ebert, Chief Executive Officer of Surge, commented: "The acquisition of Berg is highly strategic to Surge, as it solidifies the Company's position in the district, and adds both significant, high quality historical resources, and a large, prospective land package. Surge is advancing a multitrack agenda of aggressive exploration and strategic copper district consolidation in British Columbia, and this transaction represents an important step in our path forward."

Details of the Berg Project

The Berg property sits immediately northwest of Imperial Metals' Huckleberry Mine and the Ootsa property sits immediately to the southeast.  The Berg and Ootsa properties are adjoining on the west side and combined they cover the majority of the Seel-Huckleberry-Berg porphyry trend, having a total combined area of 120,155 hectares.  Mineralization at the Berg deposit forms an annular shape around a broadly cylindrical, multi-phase intrusive stock known as the Berg Stock. The historic resources comprise two highly fractured mineralized zones in the northeast and southern portions of the annulus. Hypogene mineralization is characterized by several generations of veining, and a well-developed supergene enrichment blanket is superimposed on the hypogene mineralization.

A total of 53,754 metres over 215 holes have been completed on the deposit by prior operators including Kennecott, Placer Dome, Terrane Metals, and Thompson Creek Metals. Drilling in most areas of the Berg deposit remains wide-spaced and mineralization is open to depth and outward from the Berg Stock. The deposit has been shown to have excellent vertical continuity with significant mineralization intersected greater than 550m below surface. 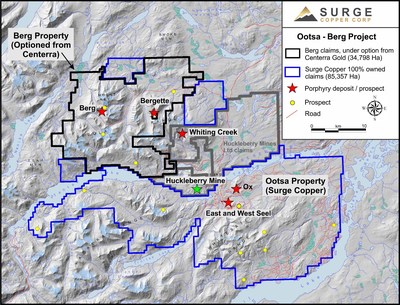 Historical Resource for The Berg Deposit(1)

During 2021 the Company anticipates a significant drill program to confirm and expand the Berg deposit, focusing on better defining the high-grade portions of the system. Planned work will include additional metallurgical testing including on the potential recovery of rhenium, and upgrading existing infrastructure to allow for year-round exploration. The Company will also evaluate possible transportation corridors to Ootsa, and conduct regional work focused on testing high-potential exploration targets within the large land package.

Details of the Option Agreement

Under the terms of the Option Agreement, Surge will issue to Centerra C$4 million in Surge common shares, or 6,825,939 shares based on the 10-day volume weighted average price of C$0.586. In addition, on each of the five anniversaries after the date of the Option Agreement, a further C$0.2 million in Surge shares will be issued to Centerra based on the 10-day volume weighted average price at the time of issuance or such higher price as may be required by the policies of the TSX Venture Exchange ("TSXV"). The total of all share payments will equal $5 million.

During the five year option period, Surge must incur C$8 million in project related expenditures, with an initial C$2 million of spending commitment over the next 24 months (C$1 million of which is a firm commitment).

Surge has the option to accelerate any expenditures (or make cash payments to Centerra in lieu of incurring project related expenditures) and the share issuances, and therefore can accelerate the earn-in.

After the above commitments are met by Surge, the option will be deemed to have been exercised by Surge, and a 70%:30% joint venture will be formed at that time, with both parties entering into a joint venture agreement.

The Option Agreement includes additional terms which are customary for a transaction of this nature. Following the formation of the joint venture, dilution below 10% will result in a deemed surrender of a participating interest in the joint venture, and conversion of such interest to a 1.0% net smelter returns royalty.  The royalty payer may  at any time thereafter elect to purchase half of the royalty for C$5 million. Closing of the transaction is subject to TSXV approval.

Dr. Shane Ebert P.Geo., Chief Executive Officer of Surge and a Qualified Person as defined by National Instrument 43-101, has approved the scientific and technical disclosure contained in this news release.

About Surge Copper Corp.
The Company owns a 100% interest in the Ootsa Property, an advanced stage exploration project containing the East Seel, West Seel and Ox porphyry deposits located adjacent to the open pit Huckleberry Copper Mine, owned by Imperial Metals. The Ootsa Property contains pit constrained NI 43-101 compliant resources of copper, gold, molybdenum and silver in the Measured and Indicated categories. There are 2 drills working at the project with drilling focused on defining the extent of the large West Seel deposit and testing new targets along the Seel Trend.

ON BEHALF OF THE BOARD OF DIRECTORS