A surprising bond between the Mediterranean Diet and Washoku 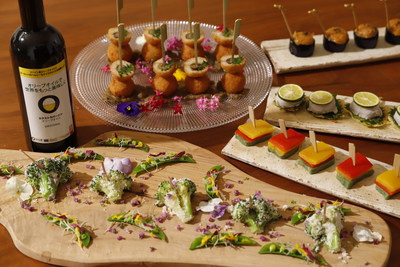 Features boiled broccoli marinated in a mix of kelp stock, salt and extra virgin Olive Oil from Spain to achieve a fruity aroma that's not usually associated with the Japanese cuisine, as well as Okara (soybean pulp), a good quality source of protein that Japan is proud of. Okara is seasoned with a sweet and sour sauce to create a refreshing, salad-style dish.

Uses Domyoji rice flour to create the crispy but glutinous texture. The croquette has a whole olive inside which, when cooked, releases the perfect amount of salty flavor into the mouth, complementing the flavor of Domyoji dough fried in olive oil.

The Mediterranean diet and washoku were inscribed by UNESCO as intangible cultural heritage in November 2010 and December 2013, respectively. Mediterranean cuisine has been widely acclaimed for being served at a table where diners talk and have an enjoyable, relaxing time while eating. Washoku, meanwhile, was inscribed for being a traditional social custom that has been passed down over generations. The Mediterranean diet is characterized by plentiful portions of whole grains and cereals, seasonal fruits and vegetables, beans, and nuts. Rather than meat, fish is a customarily consumed dish. The food also contains plenty of olive oil and involves little consumption of the saturated fatty acids that lead to the obesity and lifestyle diseases associated with a heavy intake of meat-based oils.

Commenting on his new corroboration menu, Nomura said, "I inspired by tapas that I ate in bars in Spain, which were all beautiful and vivid in the eyes, and incorporated the idea into my shojin dishes. I'm particularly attracted to Spanish olive oil's ability to add flavor. Enjoy adding to and replacing flavors using olive oil at home to discover new ways to pair olive oil with your daily Japanese dishes. You will be surprised how easy it is to create really delicious fusion dishes."