VANCOUVER, BC, Dec. 17, 2020 /PRNewswire/ -- St. James Gold Corp. (TSX-V: LORD) (OTC: LRDJF) (the "Company") is pleased to announce that subject to approval of the TSX Venture Exchange, the Company has entered into an option agreement (the "Option Agreement") with Herb M. Froude, wherein the Company has been granted the exclusive right and option to acquire a 100% interest in 29 claims covering 1,791 acres in the Gander Gold District in North Central Newfoundland Island (the "Grub Line Claims"). 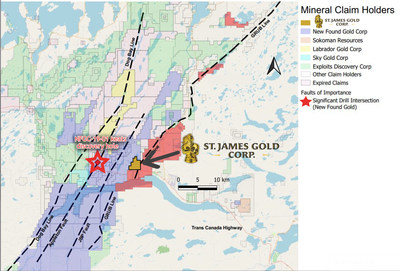 About the Grub Line Property:

The Grub Line Claims are located in the north central part of Newfoundland within a new prolific gold district, the property represents 1,791 acres adjacent to New Found Gold Corp.'s Queensway North project and where several other companies are making new high-grade gold discoveries.

The Property is sandwiched and structurally bound between the Joe Bates Pond (JBP) fault just to the west currently being worked by New Found Gold's Queensway's project, and the Grub Line fault. Both these faults are major continental deep seated plate faults that run through Newfoundland with a prominent sequence of felsic pyroclastic rocks trending northeasterly and in contact with mafic volcanic rocks the main geological components. The gold prospects with the Queensway North project and surroundings are typical of greenstone belts around the world but have been relatively underexplored.  The two major fault lineaments interpreted to be critical in controlling the extensive gold geochemistry found in till samples and in bedrock during the extensive sampling carried out in this area in the past two years by New Found Gold Corp. have led to a rush of activity within the belt and indicate that the property is prospective for structurally hosted, epizonal gold mineralization to occur.

George Drazenovic, CEO of St. James Gold Corp. stated, "With recent shallow, high-grade, coarse visible gold discoveries nearby, proximity to the Queensway North project and strategic location within these fault zones, we believe the Company is well positioned to provide shareholders a prime environment for discovery in one of the last easily accessible gold exploration districts in the world.  Given the many spectacular gold intersections published by New Found Gold Corp. in recent weeks, the company will look to pursue a program of geological mapping, soil, till and bedrock geochemical sampling and shallow drilling to bedrock on gold responses.  While the strike length of the veins hosting gold mineralization continue to grow in the region, gold exploration in this area is still in its early stages and the details of control on mineralization is somewhat unknown until extensive drilling has taken place.  We intend to pursue a program to consolidate all available historic data, initiate a work program with the intention of developing drill targets in the coming months and ultimately enhance shareholder value."

Mr. Froude will retain a royalty of 2% net smelter returns on production from the Grub Line Claims. Additionally, the Company will be required to issue an additional 500,000 common shares to Mr. Froude if at any time before or after exercise of the option the Company obtains a 43-101 Report estimating an inferred mineral resource of not less than 100,000 ounces of Au.

St. James Gold Corp. is a mineral exploration company focused on the acquisition, exploration and development of precious metal projects in North America. The Company is actively looking to acquire valuable and high quality projects. St. James Gold Corp.'s value add strategy is to acquire prospective exploration projects, integrate all available geological, geochemical and geophysical datasets with underlying geological theories, and fully fund and enhance the efficiency of its exploration programs. The Company is based in Vancouver, British Columbia, and is listed on the TSX Venture under the symbol "LORD" and in the U.S. Otcmarkets under "LRDJF".

Information set forth in this news release contains forward-looking statements that are based on assumptions as of the date of this news release. These statements reflect management's current estimates, beliefs, intentions and expectations. They are not guarantees of future performance. The Company cautions that all forward looking statements are inherently uncertain and that actual performance may be affected by a number of material factors, many of which are beyond the Company's control in particular, the fact that the Company is reviewing potential mineral property acquisitions is not an assurance that a suitable acquisition will be found.  Even if the Company is successful in making an acquisition, it may require additional financing to carry out exploration and development objectives on the property.  Such other factors include, obtaining the necessary permits to carry out its activities and the need to comply with environmental and governmental regulations. Accordingly, actual and future events, conditions and results may differ materially from the estimates, beliefs, intentions and expectations expressed or implied in the forward-looking information. Except as required under applicable securities legislation, the Company undertakes no obligation to publicly update or revise forward-looking information.