LONDON, Dec. 23, 2020 /PRNewswire/ -- Vets are bracing themselves for an 880% rise in emergency admissions – from greedy dogs who've eaten mince pies meant for Santa. 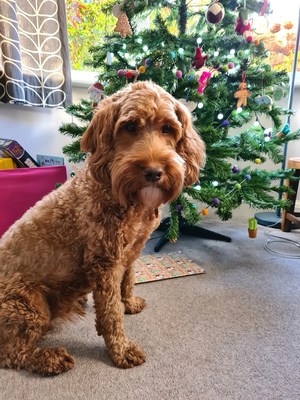 The raisins in the sweet treats are poisonous to dogs and eating them can lead to sickness and diarrhoea – and potentially even fatal kidney failure.

Every year, Vets Now, the UK's leading provider of emergency pet care, is inundated with mince pie-eating dogs on Christmas Eve and into Christmas morning. In 2019 alone, its vets treated almost 130 dogs who had eaten mince pies on Christmas Eve — up from an average of 14 cases during the rest of December.

They're expecting an even bigger increase this year due to the fact so many people have acquired puppies during lockdown.

Dave Leicester, head of telehealth at Vets Now, said: "We see more cases of raisin toxicity on Christmas Eve and Christmas Day than we do in an average month and that's why we want to raise awareness of the threat they can pose to dogs.

"It's unclear exactly what causes the toxic effects, but we do know that there is no safe quantity of grapes, raisins, currants or sultanas which may be eaten. Even tiny amounts can be toxic in individual animals and the effects cannot be predicted, so real caution must be taken with foods that contain them, including mince pies and Christmas pudding."

Dog lover Katie Mears knows exactly how traumatic it is for both canine and owner when a treat left for Father Christmas goes missing. Katie spent last Christmas Eve at the Vets Now pet emergency clinic in Swindon, Wilts, after her mischievous Miniature Schnauzer, Tiggy, munched her way through a mini feast left for Santa.

And she managed it all in a matter of seconds.

In fact, the only part of the spread she didn't have time to wolf down was a shot of whisky left out to help Santa stiffen his nerves.

Katie said: "We were upstairs when we heard a crashing noise in the sitting room – it was the plates on Santa's table smashing to the floor as Tiggy went for the food. We can laugh about it now – but it was the opposite of funny at the time. It was totally traumatic. I was convinced poor Tiggy was going to die.

"In all the time we've had her – she's six now – she never, ever, even went near the table we left the treats on and we just presumed it was out of her reach. But last Christmas Eve the temptation must just have been too much for her. I made a really silly mistake leaving the treats there and if reading this means even just one other dog owner is spared the misery I had then that will a good thing."

Katie added: "I was so upset I had to get my sister to come with me – and the two of us were at Vets Now from 10.30pm until 1am on Christmas Day. The staff were brilliant – and I'm so grateful to them. But I was still in real state. Tiggy is my little baby and I could never forgive myself if something happened to her. This year, we'll still be leaving out treats for Santa – but they are going to be much, much higher up and totally impossible for Tiggy to get."

Emergency vet Dave echoed Katie's warning about never leaving dangerous foods within paws' reach of a dog. He added: "The good news is the prognosis for grape and raisin toxicity is generally good if treated early and there's been no kidney injury. If you think your dog has eaten grapes, raisins, sultanas or currants, or anything containing them, you should telephone your vet immediately or, out of hours, your nearest Vets Now pet emergency clinic. Never assume that a small quantity will be fine."

Christmas Eve in the emergency room for Winston

Claire Grout, from Eastbourne, East Sussex, is another owner who spent last Christmas Eve at Vets Now after a mince pie incident.

Winston, Claire's Cockapoo, climbed up on a sideboard then stretched out his paw to swipe a mini-mince pie left for Santa on the mantelpiece – where Claire had been certain it would be safe.

Claire said: "None of us even like mince pies – so it was just something we left out from our four-year-old daughter in a place that would normally be out of Winston's reach. We'd not long got back to the house from visiting my mother-in-law when I heard an ominous noise. I thought 'that's Winston somewhere where he shouldn't be' and rushed off to investigate.

"I walked into the room and he had the tin foil from the pie stuck to his nose. I couldn't believe it. I'd only turned my back for a minute. We are always so very careful when we've got chocolate and raisins around because we know how dangerous they are for dogs."

A few minutes later Winston was being admitted to the Vets Now Eastbourne pet emergency clinic – where emergency staff gave him medicine to make him sick and clear his stomach. And at 10pm a slightly forlorn looking Winston was on his way back home with Claire.

Claire said: "He came out feeling very sorry for himself. He was fine the next morning and in some ways it all sounds quite funny – but it wasn't remotely funny at the time. It was very upsetting and I really wouldn't want anyone to suffer the anxious wait we had to see if he'd be okay. Santa is DEFINITELY only getting a carrot at our house this Christmas."

48 hours in hospital for hungry Dewi

Meanwhile, 200 miles away at our pet emergency clinic in Salisbury, Wilts, another mince pie drama was playing out – involving a Cocker Spaniel called Dewi.

Always-hungry Dewi managed to stretch up to a mantelpiece to pilfer a home-made mince pie baked for Santa by his owner Bev Searle's two grandchildren. All the adults in the house were busy with last minute Christmas preparations and it was Bev's six-year-old grandson Alexander who raised the alarm.

Bev said: "Alexander saw what was happening and tried to get the pie back – but there was no way Dewi was giving it up. Alexander is mad on animals and is always finding out facts about them – so, very luckily for us, he knew raisins were really bad for dogs and shouted on my daughter and I to come running to help. If Alexander hadn't been in the living room, we would never have known what had happened until, quite possibly, it was too late. I really do think Dewi would have died if it hadn't been for Alexander being so quick-thinking."

Just a quarter of an hour later, Dewi was admitted by the Vets Now Salisbury team who got him to vomit up the raisins. The emergency team team were so worried that Dewi might suffer a bad reaction they kept him under observation for 48 hours. They also administered charcoal to clean out his tummy.

Finally, on Boxing Day evening, Dewi got the all-clear to go home.

Bev said: "The clinic staff were so kind and caring – you really couldn't have asked for nicer people to look after your pet and Dewi was totally fine when we got him back."

Bev lives in Ferryside, Carmarthenshire, and was visiting daughter Emma for Christmas – and the fact she was so far from home added to the drama.

Bev said: "It was certainly a Christmas none of us are ever going to forget — and Alexander was the hero of the hour. Alexander was so worried about Dewi that he was waiting up for us when we got back from the clinic on Christmas Eve because he couldn't go to sleep without knowing Dewi was okay. We really are so lucky Alexander was there just when Dewi needed him."

Brits eat their way through 10,000 mince pies every minute during the festive season, and last year sales of the raisin-filled treats rose 13.2% to record levels.

Dogs of any age, breed or gender can be affected by raisin and grape toxicity. Owners who suspect their pet has eaten grapes or raisins should not wait for signs or symptoms to appear before they contact a vet, to ensure treatment can be given before the toxins in the fruit can be absorbed.

There are more than 60 Vets Now clinics and hospitals across the UK that are open through the night, seven-days-a-week, and day and night on weekends, to treat any pet emergencies that may occur, including on bank holidays such as Christmas Day and Boxing Day.

All of Vets Now's premises have a vet and vet nurse on site at all times and the team have drawn up an advice guide on what to do if a dog eats grapes or raisins — or foods including them such as mince pies, Christmas pudding and fruit loaf.

Vets Now also offer an online video consultation service to make professional veterinary advice more easily available. While the service is not suitable for life-threatening emergencies, experienced vets are available to discuss any worries or concerns pet owners might have. If a pet needs an in-person follow-up appointment at any vet practice, Vets Now will refund the online consultation fee, so owners never pay twice.