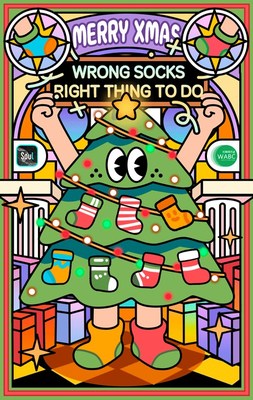 The concept of "Different Socks Day" started in 2016 with WABC's Charity Initiative: each year on December 23, people wear mismatched socks to show their willingness to care for those with autism, brain paralysis and Downs syndrome, as well as their family. People take part in this event in order to call for public awareness and understanding, alleviate the prejudice towards the challenged groups, and make the society united and diverse.

In recent years, "Different Socks Day" has grown to a well known charity event profoundly because of its proposal of a warm and caring purpose with ground-breaking ways of participation.

As a social platform giving genuine joyfulness to Gen Z, SOUL has made the best out of its strengths and planned a series of charity programs for this event. Users are able to design their favorite patterns on virtual socks, which later becomes the Christmas tree decoration on the event page where personal Christmas cards are generated. By sharing those greeting cards on social platforms, users are able to step in discussion about the event entitled as "Different Socks Day, Dare to be Different". Additionally, Soul App call their users to take simple actions like wearing mismatched socks and posting pictures about it on that day to encourage more people to join the event, in which way the charitable event has become more than just doing the right thing, it is now a trendy thing to follow.

Experts say that in recent years charity events seem to have grown more attractive for younger generations. Age groups under 25 including Gen Z have stepped up to be a driving force for charity and will keep this momentum in the next decade. Internet platforms are increasing the influence of charitable efforts and enriching approaches of participation into charity. Expanding coverage of different values in charity work amongst other aspects also play an important role as a key link between charitable activities and young people. As more young people participate in creating and being a part of charity, social platforms like Soul which are highly preferred by Gen Z users will become important arenas for these events and activities in the future.

Facilitating charitable activities is part of Soul's many a target of social responsibilities to deliver genuine caring that respects individual values and promotes individual development. This is deeply connected with the philosophy that Soul holds as a corporate heritage. In the future, with core values of kindness and goodwill, Soul will continue fulfilling its corporate social responsibilities in more various fashions.

Soul App: Soul App was launched in November 2016 and is an intelligent social network platform based on the soul. Users can express themselves authentically and equitably on the platform and find friends with whom they can communicate in depth. Soul App recommends people and content that users may like with one click through a "Smart Match Algorithm". Soul App helps users communicate with potential friends so they can chat anytime, anywhere, thereby reducing loneliness, improving quality of life for users, making individuals happier, and creating a more united and better society.

WABC: In 2010, WABC (World of Art Brut Culture) was founded in Shanghai as a private non-profit organization providing the special needs population (autism, mental retardation, cerebral palsy, etc.) with artistic potentials development courses, and offer opportunities for the trainees to display their artistic talents. WABC's training, as a supplementary therapy, are proved to be effective both in the interest cultivation and rehabilitation of the special needed.

WABC Charity Foundation was founded in 2016, hoping to promote the society to make remarkable progress in accepting people with special needs and bring real and lasting changes to the social integration.