Brain cells often cluster and grow together creating three-dimensional columns. While this pillar-like pattern of neurons is established, the exact mechanism behind its formation is still elusive. Makoto Sato's team at Kanazawa University has been closely studying this phenomenon. Their recent findings explain how molecules in the brain work in conjunction to create the architectural marvels that are the columns. 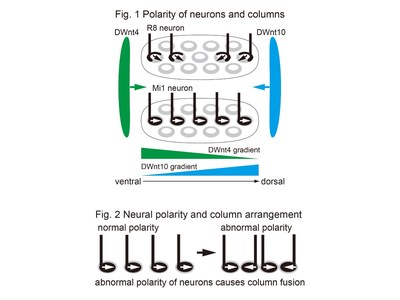 The researchers base much of their work on the Drosophila (fruit fly) due to the organism's genetic similarities to humans. In this study they focused on the visual center of the fly's brain in a region known as the medulla. This region resembles the human cerebral cortex—the primary seat of reasoning. Developing columns in the medulla were photographed in real-time to find that a protein known as Fmi was abundant in the growing stages of the fly and vanished shortly after. Fmi also partakes in a process known as planar cell polarity (PCP) which drives the spatial orientation of a cell in two-dimensional space. Thus, it was purported that PCP was also at play in the development of columns. Indeed, deactivation of PCP components resulted in impaired column formation. What's more, a new candidate, Fz2, was found to be working closely with the individual PCP components.

Fz2 is linked to a cellular pathway called Wnt signaling. A close inspection of the medulla revealed that prime regulators of the Wnt pathway, DWnt4 and DWnt10, were operational in the vicinity. When DWnt4 and DWnt10 were also disabled, a disruption of column structure in neighboring regions followed. Column construction was controlled by a complex chain of architects.

Makoto Sato and his co-workers have previously revealed three neurons types—R7, R8 and Mi1— to comprise the columns. Thus, they then investigated the role of Wnt/PCP in these neurons. Switching PCP off resulted in the Mi1 and R8 neurons changing direction, confirming that orientation was controlled by this pathway. On the other hand, when Wnt signaling was turned off the Mi1 neurons also showed structural impairment. Wnt/PCP was, therefore, instrumental to proper spatial  and structural development of the columns.

This study reveals the intertwined nature of the mechanisms that drive brain development. "[We] show that Wnt ligands globally regulate neuronal orientation and column arrangement through Fz2/planar cell polarity signaling in a three-dimensional space in the brain", summarize the researchers. These processes are key to monitoring healthy growth and tracking disorders in the developing brain.

Planar cell polarity (PCP) – Cell polarity is a phenomenon that enables spatial differences in shape and size within cells. Thus, cells may appear elongated at one end and oval at the other (as seen in the classic image of a neuron). This polarity occurs in a two-dimensional space and enables cells to carry out multiple functions simultaneously. A neuron can thus traverse distances at one end while the other end sustains essential life processes. Since the PCP is a complex process, multiple molecules are part of its chain. Until now, the role of PCP in regulating three-dimensional spatial orientation within neurons was elusive. This study elucidates how Wnt signaling works in conjunction with PCP to achieve this.

As the leading comprehensive university on the Sea of Japan coast, Kanazawa University has contributed greatly to higher education and academic research in Japan since it was founded in 1949. The University has three colleges and 17 schools offering courses in subjects that include medicine, computer engineering, and humanities.

The University is located on the coast of the Sea of Japan in Kanazawa – a city rich in history and culture. The city of Kanazawa has a highly respected intellectual profile since the time of the fiefdom (1598-1867). Kanazawa University is divided into two main campuses: Kakuma and Takaramachi for its approximately 10,200 students including 600 from overseas.