LOS ANGELES and OXFORDSHIRE, United Kingdom, Jan. 5, 2021 /PRNewswire/ -- At the request of a long-term client, Singer has looked to a golden era of Porsche rallying in the 1980s, and to automotive heroes including the 911 SC/RS and 959, to reimagine his air-cooled 911s as World Rally Championship-inspired, all-terrain competition machines.

Singer's latest services will enable their clients to go off-road racing, with a Porsche 911 modified by Singer for all-terrain use.

FULL PRESS RELEASE (INCLUDING SPECS AND QUOTES), PHOTOS AND VIDEO CAN BE FOUND AT: https://www.dropbox.com/sh/ae157m35eo7y193/AACZK37i8ABXTkcP0LY1QUcba?dl=0 with all photos and video credited to Singer Vehicle Design.

The All-terrain Competition Study has been undertaken by Singer, in partnership with renowned 911 rally specialist Richard Tuthill, in response to the request from their client for modifications to his air-cooled Porsche 911 that would enable the car to compete in off-road racing and to demonstrate extensive all-terrain exploration capabilities. To highlight the broad repertoire of the ACS, the client has commissioned two machines, one - in Singer's iconic Parallax White - focused on high-speed desert rallying and a second – in Corsica Red - configured for high-speed, high-grip tarmac events and disciplines.

Porsche 911s prepared by UK-based off-road competition specialist Richard Tuthill have dominated rally events for decades, with recent victory in the 2019 East African Safari Classic marking a remarkable 4th win in the grueling 5000km event across Kenya and Tanzania. These successes sit alongside deep expertise from the world of WRC competition and events such as the Paris-Dakar.

The results of the All-terrain Competition Study (ACS) will be shown on Singer's Instagram channel @singervehicledesign.

With headquarters in Los Angeles, Calif., the Singer Group was formed a decade ago to pursue the creative possibilities within the vibrant world of iconic automobiles.  Air-cooled Porsche 911s, restored in a bespoke manner by Singer for their owners, have been presented with the world's finest collectors' cars at events including The Quail, A Motorsports Gathering and Goodwood Festival of Speed.

Singer Vehicle Design (Singer) restores and reimagines 1989 to 1994 Porsche 911s, based on the 964 chassis for its clients.  Singer does not manufacture or sell automobiles.  Singer's Global Partner Network represents the brand across North America, Europe, the Middle East and Asia.

Singer is not sponsored, associated, approved, endorsed nor, in any way, affiliated with Porsche Cars North America, Inc., or Dr. Ing. h.c.F. Porsche, AG. The Porsche® name and crest and 911® are trademarks of Dr. Ing. h.c.F. Porsche AG, and any other products mentioned are the trademarks of their respective holders. Any mention of trademarked names or other marks is for purpose of reference only.

The product of Singer's painstaking effort is a Porsche 911 restored and reimagined by Singer.  Out of respect for Porsche, and to respect Porsche's trademark rights, this incredible machine should never under any circumstances be referred to or described as a "Singer," "Singer 911," "Singer Porsche 911" or a "Porsche Singer 911," or in any other manner that suggests that it is anything but a Porsche 911 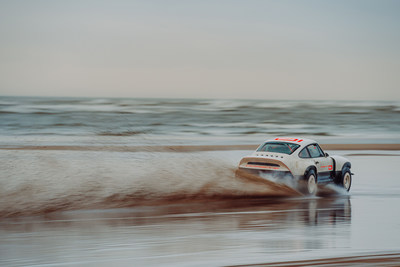