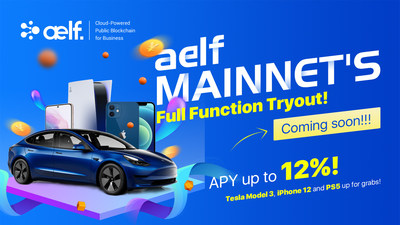 Users who participate in staking will receive earnings. Users will get ELF Token (Mainnet Token) and LOT Token (Lucky Draw) for the tryout by staking. This is also a large trial run before the mainnet token swap, which can avoid unnecessary problems and losses and ensure the security of the future mainnet token swap.

The campaign is divided into 3 phases

1. Stake and get returns

Users need to stake the ERC20-ELF token to join this campaign. The pre-staking will be starting from 18:00 (SGT) on February 3rd. The total staking period will last 30 days. Participants can receive ELF (mainnet token) at the ratio of 400:1 by staking. At the end of the staking period, users can manually redeem their staked ERC-20 ELF. To fully try out the mainnet functions, aelf team recommend the staking amount to be greater than 1000 ELF (≥1000 ELF).

In addition, no matter how many tokens were staked, users can get the LOT token at the ratio of 1:1. The LOT Token can be used to participate in the Lucky Draw, divvying up the prize pools and the Lucky Box Game. The ELF Token (mainnet token) and LOT token can be collected manually from the campaign page, with a delay of up to 10 minutes.

During this campaign (12:00, February 4–18:00, March 3), users can get extra LOT tokens to participate in the lucky draw after completing daily tasks. The available functions include the same-chain transfer, cross-chain transfer, resource token trading, etc.

If users have any problems during the campaign, they can get LOT Token by submitting feedback. Submit feedback about the mainnet function tryout here https://forms.gle/RRiTGSmaeFKqmNfj6

Rewards will be distributed in accordance with the rating upon the aelf team's review. The evaluation will take 1 or 2 working days upon submission. aelf team recommend that users should submit as soon as possible, and there may be evaluation delays near the end of the campaign.

If users find any bugs during the campaign, they can get the LOT token via Report Bug here: https://forms.gle/gs2y7ksdqxsfvvja8

Participating in on-chain bug submission. Rewards will be distributed in accordance with the rating upon the aelf team's review:

The evaluation will take 1 or 2 working days after submission. aelf team recommend that users should submit as soon as possible, and there may be evaluation delays near the end of the campaign.

During the campaign (12:00, February 4–18:00, March 3, SGT), users can use the LOT token to swap the lucky draw code, that is, to participate in the Lucky Draw. aelf team will announce the results every Wednesday, Saturday, Sunday at 6:00 p.m. Users can switch the lucky draw code from the previous results to the current results (100 LOT = 1 lucky draw code). There is no upper limit on the number of lucky draw codes. Prizes include iPhone 12, Switch, PS5, etc. Don't miss it!

During the campaign (12:00, February 4–18:00, March 3, SGT), users can use the LOT token to buy tickets in Lucky Box App and draw prizes every 10 minutes. If users win, they can manually collect the LOT token. Lucky Box is an open-source DAPP based on random numbers developed by aelf team, which can guarantee the reliability and security of random numbers and avoid the security problems brought by pseudo-random numbers. When users log into the Lucky Box, they had to bind the aelf Wallet, which shared the LOT balance.

Based on the above list, two prizes will be created for this event: User whose accumulated winning amount ranks first will receive the grand prize (Tesla Model 3). A Total of 200,000 LOT tokens are awarded to the top 4 participants (based on the accumulated participated times). These LOT tokens can be used to share out the prize pool.

*How to define the accumulated participated times? No matter how many lottery tickets users buy in the current lottery period, they are regarded as having participated once.

*If the ranking is tied, the reward will be divided equally. For example, if two people are tied for the first place, each person will get 75,000 LOT tokens.

*Anti-cheating instructions: the technical team will analyze the backend data, and if anyone is found to be cheating, they will be disqualified.

5. Divvy up the Prizes Pool

The ultimate prize pool module will be unlocked and shown on the campaign page after 18:00 on March 3. After the prize pool is available, the user may check out the total prize amount of the prize pool on the corresponding page. After 48 hours (18:00 on March 5), users can get the ERC-20 ELF award of the prize pool in proportion. This is based on the submitted LOT amount and Ethereum wallet address. When the winners are announced, the page will display the amount of rewards that users can get. aelf team will distribute the tokens within 7 working days after the announcement.

Join this mainnet function tryout to not only familiarize with the mainnet functions but also get super-high-annualized revenues or win a Tesla car! Get Everything Ready & Join now!

Instructions on how to Install & Use the Must-have software for Mainnet Full Function Tryout: https://aelf.io/gridcn/How_to_Prepare_Must-have_Software_en.pdf