HONG KONG, Feb. 8, 2021 /PRNewswire/ -- Basecare (Suzhou Basecare Medical Corporation Limited), an innovative assisted reproductive genetic testing enterprise, today officially listed on the main board of HKEX (HKG: 2170). Approximately 66.667 million shares were issued and total funds raised was $HK1.82 billion. The initial price was $HK27.36 per share and shares were oversubscribed 403 times, up 60 percent as of the time of this press release, with a total market value of $HK8.92 billion. 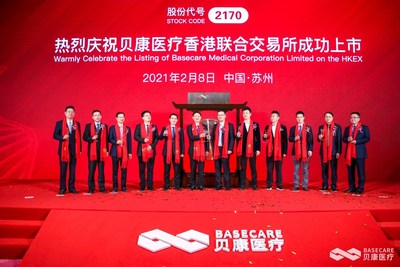 This listing represents an important milestone in the history of Basecare, a leading-edge company that has attracted seven well-known global cornerstone investors including Orbited, Lake Bleu Capital, China Reform Overseas, Affin Hwang AM, WinTwin Capital, Foresight and Ivy Capital. Basecare has long been optimistic about the internationalization and diversification of the capital market of Hong Kong, and bullish on China's assisted reproduction industry. After this listing, Basecare will become the first gene sequencing stock listed on the HKEX, which will open the door to large-scale industrialization of third-generation test tube detection kits.

One out of every six couples in China has fertility difficulties. There are more than 70 medical institutions with third-generation test tube qualification in China, and the total number of treatment cycles per year is more than twice that of the United States, demonstrating that China is the largest assisted reproductive health market in the world. According to a report by Frost & Sullivan, the scale of China's reproductive genetics medical device market in 2015 was CNY1.3 billion, surging to CNY3.4 billion in 2019, a compound annual growth rate of 28.4%, and is expected to reach CNY11.2 billion by 2024.

According to the National Health Commission, the average IVF success rate in China was less than 50% in 2018. The clinical difficulty of IVF lies in the health of an embryo only being determined by morphology, but not accurately determined by genetics. The PGT-A kit developed by Basecare has filled the clinical blank of embryo gene detection in China and has been deemed a "National Innovative Medical Device Special Approval" product. In February 2020, Basecare's PGT-A kit completed its large-scale embryo clinical trial and was approved by the National Medical Products Administration for marketing, marking the entry of China's third-generation IVF gene testing kit into the "licensed" era. Since August 2020, the PGT-A kit was incorporated into the national mandatory industry standard as a Class III medical device.

In order for more people to have a healthy child in a safer and less costly way through gene testing technology, Basecare has provided commercial insurance with a maximum claim limit of CNY400,000 for each PGT-A test, addressing the worries of every family using the third-generation test tube technology. Currently, by relying on its core advantages in the PGT field, Basecare has built a full reproduction cycle product line with a three-level prevention system covering the pre-pregnancy, prenatal and neonatal periods. Basecare aims to help 50 million infertile patients in China to have children, ensure patients carrying genetic disease genes have healthier children, and eliminate problems of fertility in China.

After being listed, Basecare will now establish headquarters in Suzhou and construct the largest IVD industry chain and an upstream and downstream cluster of high-end device manufacturing in China. In the next five years, Basecare will complete registration and certification of the full reproduction cycle industry line, help more families have healthy children through gene technology innovation, contribute to national eugenics, and continuously promote the development of China's assisted reproduction industry.