ESPOO, Finland, Feb. 12, 2021 /PRNewswire/ -- A project consortium which includes startups, industry, research centers, supercomputing centers and academia has come together to accelerate Europe´s Quantum leadership efforts. IQM Quantum Computers will bring the members of this project consortium together and lead this project as a system integrator. 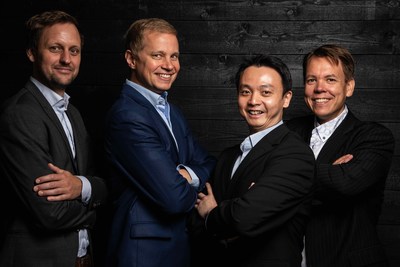 Europe has always been excellent in academic research, but over the past few decades commercializing research projects has been slow compared to international competition. This is starting to change with quantum technologies. As one of the largest efforts in Europe and worldwide, Germany announced € 2 Billion funding into quantum programs in June 2020, from which €120 Million are invested in this current round of research grants.

The scope of the project is to accelerate commercialization through an innovative co-design concept. This project focuses on application-specific quantum processors, which have the potential to create a fastlane to quantum advantage. The digital-analog concept used to operate the processors will further lay the foundation for commercially viable quantum computers. This project will run for four years and aims to develop a 54-qubit quantum processor.

The project is intended to support the European FET Flagship project EU OpenSuperQ, announced in 2018 which is aimed at designing, building, and operating a quantum information processing system of up to 100 qubits. Deploying digital-analog quantum computing, this consortium adds a new angle to the OpenSuperQ project and widens its scope. With efforts from Munich, Berlin and Jülich, as well as Parity QC from Austria, the project builds bridges and seamlessly integrates into the European quantum landscape.

"The grant from the Federal Ministry of Education and Research of Germany is a huge recognition of our unique co-design approach for quantum computers. Last year when we established our office in Munich, this was one of our key objectives. The concept allows us to become a system integrator for full-stack quantum computers by bringing together all the relevant players. As Europe's leading startup in quantum technologies, this gives us confidence to further invest in Germany and other European countries" said Dr. Jan Goetz, CEO of IQM Quantum Computers.

As European technology leader, Germany is taking several steps to lead the quantum technology race. An important role of such leadership is to bring together the European startups, industry, research and academic partners. This project will give the quantum landscape in Germany an accelerated push and will create a vibrant quantum ecosystem in the region for the future.

"DAQC is an important project for Germany and Europe. It enables us to take a leading role in the area of quantum technologies. It also allows us to bring quantum computing into one of the prime academic supercomputing centres to more effectively work on the important integration of high-performance computing and quantum computing. We are looking forward to a successful collaboration," said Prof. Dr Martin Schulz, Member of the Board of Directors, Leibniz Supercomputing Centre (LRZ).

"The path towards scalable and fully programmable quantum computing will be the parallelizability of gates and building with reduced complexity in order to ensure manageable qubit control. Our ParityQC architecture is the blueprint for a fully parallelizable quantum computer, which comes with the associated ParityOS operating system. With the team of extraordinary members of the DAQC consortium this will allow us to tackle the most pressing and complex industry-relevant optimization problems." said Magdalena Hauser & Wolfgang Lechner, CEOs & Co-founder ParityQC

"We are looking forward to exploring and realizing a tight connection between hardware and applications, and having DAQC quantum computers as a compatible alternative within the OpenSuperQ laboratory. Collaborations like this across different states, and including both public and private partners, have the right momentum to move quantum computing in Germany forward." said Prof. Frank Wilhelm-Mauch, Director, Institute for Quantum Computing Analytics, Forschungszentrum Jülich

"At Infineon, we are looking forward to collaborating with top-class scientists and leading start-ups in the field of quantum computing in Europe. We must act now if we in Germany and Europe do not want to become solely dependent on American or Asian know-how in this future technology area. We are very glad to be part of this highly innovative project and happy to contribute with our expertise in scaling and manufacturing processes." said Dr. Sebastian Luber, Senior Director Technology & Innovation, Infineon Technologies AG

"This is a hugely exciting project. It is a chance of Europe and Germany to catch up in the development of superconducting quantum computers. I am looking forward to adventures on understanding how such machines can be certified in their precise functioning."  said Prof. Jens Eisert, Professor of Quantum Physics, Freie Universität Berlin

IQM is the European leader in superconducting quantum computers, headquartered in Espoo, Finland. Since its inception in 2018, IQM has grown to 80+ employees and has also established a subsidiary in Munich, Germany, to lead the co-design approach. IQM delivers on-premises quantum computers for research laboratories and supercomputing centers and provides complete access to its hardware. For industrial customers, IQM delivers quantum advantage through a unique application-specific co-design approach. IQM has raised € 71 Million from VCs firms and also public grants and is also building Finland's first quantum computer.