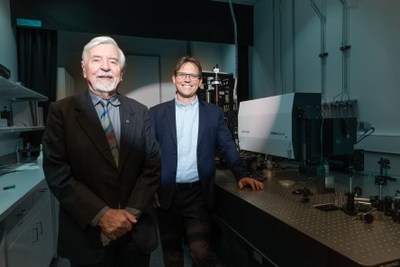 This investment has established Australia's first commercial fusion energy company, which will now drive an international R&D program aimed at the Holy Grail of fusion energy research - to demonstrate net energy gain and prove that HB11 Energy can develop a clean, safe and virtually unlimited source of large-scale electricity production.

The round was entirely funded by high-net-worth individuals.

"Since launching our pre-seed round in April last year, we've been overwhelmed by investors interested in the environmental impact of our technology, as well as the financial returns inherent in our success," said Dr Warren McKenzie, Founder and Managing Director of HB11 Energy.

Prof Hora's career's work has been motivated by the enormous benefits of the HB11 reaction for energy generation over other nuclear energy approaches. The HB11 reaction creates electricity directly, the fuels are safe and abundant, it does not create harmful radiation and there is no possibility of a reactor melt-down. Patents have been granted in four countries for Hora's concept generator.

"Our clean and absolutely safe reactor can be placed within densely populated areas, with no possibility of a catastrophic meltdown such as that which has been seen with nuclear fission reactors," said Professor Heinrich Hora.

Prof Hora's theories, developed over half a century of research at UNSW Sydney, were validated in recent years with several academic research groups demonstrating the non-thermal initiation of the HB11 fusion reaction using high-peak-power lasers, of which two were published in 2020.  HB11 Energy has launched its experimental program with researchers from Australia, the USA and the UK.

Lukasz Gadowski appointed to the HB11 Energy Holdings Board

Gadowski is a deep-tech investor with a mission to deliver a better future via technology and a focus on clean energy and next-generation aviation. He has an impressive background as an entrepreneur having grown several companies to multi-billion-dollar valuations. Among these is Delivery Hero, which recently entered the DAX – Germany's leading stock market index. Others include Enpal, a German solar company for consumers, and Volocopter, globally leading company in the upcoming field of Urban Air Mobility.

"We are excited to welcome Lukasz Gadowski to the Board," said Prof Hora. "His passion for physics, experience building many immensely successful multinational companies and perspective on the broad impact of our technology, all make Lukasz a most valuable addition to our team."

"Professor Heinrich Hora is the pioneer of hydrogen-boron fusion technology – the most elegant approach that I have come across so far. Now we have to put theory into practice. A difficult task, but it's worth the effort alone," Gadowski said. "It is an honour to be part of the revolution of energy production alongside Heinrich Hora."

As HB11 Energy ramps up its R&D activities this year, it is taking expressions of interest for collaborations with university and public sector researchers. HB11 Energy is also planning to launch a seed fundraising round later this year and is interested in hearing from prospective investors. https://hb11.energy/contact/