CAIRO, Nov. 15, 2021 /PRNewswire/ -- During their visit to Egypt, the area directors for Egypt, North Africa, Turkey, Cyprus and the Caucasus at British American Tobacco, discussed the company's ambitious strategy and plan to achieve an impactful change in tobacco and nicotine products. They applauded the Egyptian government for the great efforts to fulfill sustainability in all sectors, needless to mention its outstanding ability to manage the Covid-19 crisis up to standards, in addition to reducing the inflation rates that the whole world is witnessing. 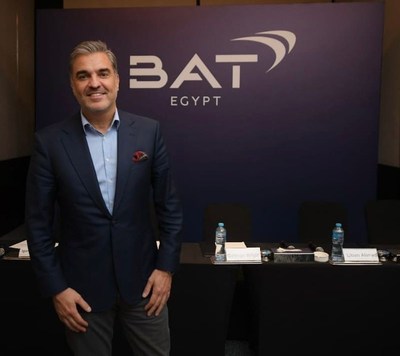 Gokhan Bilgic, Area Director at British American Tobacco said: "Sustainability is our top priority and Egypt has made great efforts to achieve sustainability in all sectors.  We always emphasize our full commitment to sustainability in our agenda and include goals consistent with environmental standards. And all our activities and work highlight our interest in achieving our goal, adding that British American Tobacco "BAT" was the first company to officially launch the heated tobacco product "glo" in the Egyptian market at the beginning of this year as a contribution to combat illicit THP products, parallel economy and contributing towards government revenues in terms of customs and taxes".

The Area Director of British American Tobacco explained that Egypt is one of the top ten tobacco markets in the world, and that the company's investment in Egypt behind glo -  the heated tobacco product exceeds GBP 20 million in 2021 and BAT also provided more than 1,000 job opportunities, adding that the tobacco industry has greatly contributed to the development of the economy of many countries of the world. Bilgic praised Egypt's great efforts to curb the inflation rate, explaining that these efforts have greatly contributed to the increase in the volume of investment within the country.

Bilgic hoped that the Egyptian government would issue multiple new manufacturing licenses for traditional cigarettes and new products separately, confirming that the investment climate in Egypt is attractive and encourages investors to inject more investments, adding that the issuance of multiple licenses with different production capacities will contribute towards increasing Government revenue from the tobacco industry.

It is worth noting that a number of tobacco companies, operating in the Egyptian market, have submitted a request to the Prime Minister to amend a number of articles of the new manufacturing license terms and conditions, including separating the production of traditional cigarettes from new generation products such as electronic cigarettes and HTP; avoid having them in one license. The companies offered several alternatives to the state, including offering multiple licenses linked to production quotas.

Regarding E-cigarettes, Bilgic mentioned that the company plans to launch their product "Vuse" in Egypt next year, following the Egyptian government legalization of e-liquid products based on the Minister of Health Decision No. 79 of 2021 to include both heated tobacco and e-liquid products under the current tobacco bill.

The company recently obtained in America the approval of the US Food and Drug Administration (FDA) in the market making BAT's E-cigarette product the first product to obtain this approval.

Liban Ahmed, Cluster Manager - MEDRED (Egypt, Sudan, Libya and Tunisia) explained: "We are constantly working to update our product portfolio in line with consumers' priorities, while maintaining sustainable job opportunities for our employees who are the core f our business and investments and are the main drivers of the company's operations, adding that BAT has strong and solid relationship with the Eastern Tobacco Company that extend back more than 20 years... and this is demonstrated through the partnership and cooperation agreements between the two parties."

Liban deeply appreciated the Egyptian government for its legalization of e-liquid, which will allow the company to inject new investments and increase job opportunities in the Egyptian market over the next three years.

Murat Guven, Legal and External Affairs Director Turkey, Caucasus & North Africa Area at British American Tobacco, said: "We seek to provide solutions to fight the illicit trade of tobacco products and new categories and raise awareness in countries we are operating in.

"In Egypt the DNP exceeded 10% in 19/20 which resulted in an average total government revenue loss to illicit of EGP 10 billion, adding there is an economic solution that lies in offering the consumer an international brand with premium quality at an affordable price point. Enforcement and awareness is also very important and Hence BAT Egypt kicked off its AIT plan earlier this year to raise awareness through cooperation with relevant government authorities."

Guven added: "We have carried on our 1st AIT work shop in cooperation with the Egyptian Customs Authority and the Eastern Tobacco Company. Its within our framework of the responsibility that the company has towards the state and its economy, to contribute to solving problems and finding solutions for the public benefits and preserve the resources of the state's public treasury.

BAT, in cooperation with the Egyptian Customs Authority and the Eastern Tobacco Company, organized the first workshop in Alexandria to identify common problems, systems and best practices related to combating the illicit trade in tobacco products and discuss means of cooperation. The workshop also included organizing an exhibition of smuggled, counterfeit, expired cigarettes, tobacco, HTP, as well as models of the stamp tax, and detection methods.