The meeting, which lasted a longer-than-expected three and a half hours, was the first of its kind between the two leaders since Biden took office in January. They had spoken twice over the phone, in February and September.

Here are some highlights of the virtual meeting: 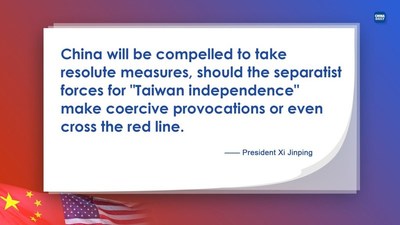 Xi told Biden that China will be compelled to take resolute measures, should the separatist forces for "Taiwan independence" make coercive provocations or even cross the red line.

Xi said that the new wave of tensions across the Taiwan Straits was due to the repeated attempts by the Taiwan authorities to look for US support for their independence agenda as well as the intention of some Americans to use Taiwan to contain China.

Such moves are extremely dangerous and are just like playing with fire, he said, noting that whoever plays with fire will get burnt. 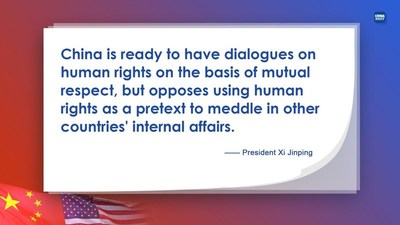 Xi said that whether a country is democratic or not should be left to its own people to decide, and dismissing forms of democracy that are different from one's own is in itself undemocratic.

The president also said that China is ready to have dialogues on human rights on the basis of mutual respect, but opposes using human rights as a pretext to meddle in other countries' internal affairs.

Xi said that climate change can well become a new highlight of China-US cooperation as both countries are transitioning to green and low-carbon economy.

Noting that China is still the largest developing country in the world, Xi said all countries need to uphold the principle of common but differentiated responsibilities, and strike a balance between addressing climate change and protecting livelihoods.

"What the world needs is less finger-pointing or blame game, but more solidarity and cooperation," said Xi. 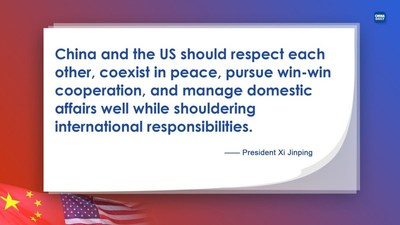 Xi highlighted the importance of a sound and steady China-US relationship in advancing the two countries' development and for safeguarding a peaceful and stable international environment.

"China and the US should respect each other, coexist in peace, and pursue win-win cooperation," he said.

Xi also said that it is hoped that the US president will demonstrate political leadership and steer America's China policy back on the track of reason and pragmatism.

Xi said that business is business, and economic and trade issues between China and the US should not be politicized.

He said that China takes seriously the wishes of the US business community to travel to China more easily, and has agreed to upgrade fast-track arrangements.

The president also said that the US should stop abusing or overstretching the concept of national security to suppress Chinese businesses.

He urged the US to be mindful of the spillover effects of its domestic macro policies and adopt responsible macroeconomic policies.

Xi said that China and the US need to call for the establishment of a cooperation mechanism for global public health and communicable disease prevention and control, and promote further international exchanges and cooperation.

Response to any major disease must be based on science, he said, adding that politicizing diseases does no good but only harm.

Xi also said the pressing priority in the global COVID response is to address the vaccine deficits and close the vaccination gap.