Sichuan, China: Giant Panda in Aba "Showing Off Skills" in the Wild Environment

Sichuan, China: Giant Panda in Aba "Showing Off Skills" in the Wild Environment

SICHUAN, China, Dec. 15, 2021 /PRNewswire/ -- According to the Aba Management Branch of Sichuan Giant Panda National Park on November 29th, China, the staff of Mao County Management Center Station of Giant Panda National Park has found out several giant frequent appearances of giant pandas while going through the recently collected infrared camera data. They were climbing the trees, doing catwalks, "juggling" and "showing off other fancy skills" in front of the camera. 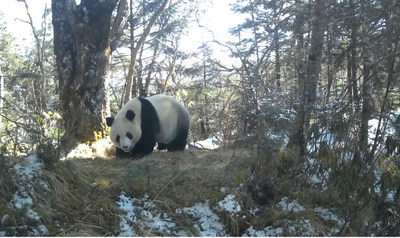 Several giant pandas were stepping in front of the camera leisurely, performing a special catwalk show of our national treasure in winter. There was also a panda leaning over on the tree, with his "hands" wrapped his head, seemed to be immersed in his own world. One of them is mostly naughty and was stamping on the tree trunk with "one foot" while moving upwards flexibly further. With this difficulty level, he could be called as an "acrobat".

Tao Boshan, director of Mao County Management Center Station of Giant Panda National Park, said: "Pandas are showing up more and more frequently now. They can be seen almost every other day." According to his opinion, two reasons have been contributing to the frequent appearance of giant pandas: 1. The protection of wild giant pandas is stronger and the ecology is getting better and better after the establishment of Giant Panda National Park; 2. Mao County Management Center Station of Giant Panda National Park has initiated the 3rd. the phase of the infrared camera installation since the beginning of this year. There are more than 500 infrared cameras in the management and protection area of Mao County. This number will reach 560 after the full accomplishment of the project at the end of December. With the help of 24 holders, they could monitor an area of 400 square kilometers. "The infrared cameras do not only observe the survival and reproduction of giant pandas but also monitor illegal activities such as poaching."