RIGA, Latvia, Dec. 21, 2021 /PRNewswire/ -- Today on December 21, JSC "Grindeks", the leading pharmaceutical manufacturer in the Baltic States celebrates its 75-year anniversary. Over these 75 years, "Grindeks" has become a global pharmaceutical industry company and has helped millions of patients worldwide.

Origins and development of "Grindeks"

The origins of "Grindeks" can be found in 1946, when the Vitamin and Hormones Plant was transferred from the supervision of the Ministry of Food Production to that of the Latvian Academy of Sciences with the goal of gradually re-establishing it as an experimental plant. The production of the Vitamin and Hormones Plant at the time differed greatly from the products produced by "Grindeks" today, those were food concentrates, soy sauce, primrose syrup, beer yeast, microelement mixtures, etc.

In 1957, the Vitamin and Hormones Plant was incorporated into the structure of the newly established Organic Synthesis Institute, establishing the Latvian Academy of Sciences Organic Synthesis Institute's Experimental Plant. During the second half of the 1970's, inventions from the molecular biology and microbiology laboratories were introduced into the manufacturing process, manufacturing technologies were improved and synthesis of new ingredients were mastered. The synthesis of Grindeks' brand product Mildronate® was commenced.

In 1991, along with the regaining of Latvian national independence, the Latvian State medicinal drug research and manufacturing company "Grindeks" was founded on the basis of the Experimental Plant.

Today Grindeks Group consists of JSC "Grindeks" and its four subsidiaries. Each one of them is contributing to the growth of the Group and being an integral part of the corporation.

JSC "Kalceks" based in Latvia, is specializing in generics mostly for the hospital segment. "HBM Pharma Ltd.", based in Slovakia, is a pharmaceutical product manufacturer and operates in the field of producing injectable in ampules and tablets. JSC "Tallinn Pharmaceutical Plant", based in Estonia, produces ointments, in turn, "Namu apsaimniekosanas projekti Ltd." is responsible for managing "Grindeks" real estate.

"Grindeks" has reached a record high turnover and profit in 2021. The largest demand is for medicines made to treat cardiovascular diseases, as well as central nervous systems. We are exporting our production to 97 countries worldwide.

An important development component is the brand and values of the company – humanity, simplicity and growth. The name "Grindeks" is based on the name of the first Latvian pharmacist, natural scientist, doctor, chemist Professor David Hieronymus Grindel. Honoring D. H. Grindel, grindelia flower sybmol was selected as one of the company's recognition marks.

By providing patients both in Latvia and worldwide with the necessary medicines, "Grindeks" is one of the largest employers and taxpayers in Latvia, with more than 13 million euros paid taxes in 2021. The company provides jobs for more than 800 employees in Latvia. The group altogether has 1500 employees.

Ph. D. Juris Hmelnickis, Chairman of the Board of JSC "Grindeks": "Our team prides itself on what the "Grindeks" Group is today and believes that only part of a significant path has been taken to make us one of the TOP 100 pharmaceutical companies in the world. I can assure that, because I have grown in "Grindeks" professionally and experienced how this company has developed purposefully over the years. I started as a laboratory trainee more than 20 years ago and even then I was looking forward to the company's upturn. Today, while running the company, I see every day that only thanks to the professional work of our employees and the spirit of our team we can achieve our ambitious goals and provide patients with the necessary medicines."

Year of anniversary and contribution to society

"Grindeks" celebrated its anniversary throughout 2021, organising and supporting conferences and various projects that promoted cooperation between health professionals and the pharmaceutical company. In 2021 "Grindeks" supported the "Annual Medicine Award", international congress "BALTANEST 2021" and The National Rehabilitation Congress, the company also organized an international online conference for doctors. This year  the highest award of "Grindeks" – D. H. Grindel Award was given to Head of RSU Department of Internal diseases, professor Aivars Lejnieks.

Celebrating the 75-year anniversary of "Grindeks", the leading pharmaceutical manufacturer in the Baltic states invited high-school students to the "Grindeks Online Brain Games", which was attended by secondary school pupils from all over Latvia, promoting interest in chemistry and science among pupils. The contest took part in three rounds, bringing together more than 140 teams from all over Latvia.

In honour of its 75-year anniversary, "Grindeks" created a book for families that was delivered to 18 hospitals in Latvia, with a total of 15 000 copies. The aim of the book is to make it easier for families with children to wait in the hospital and other healthcare facilities while reading various fairy tales and playing games.

The future of "Grindeks"

In order not to halt at the results already achieved and to continue the gradual and sustainable growth of the Group in the long term, "Grindeks" pays particular attention to improving production infrastructure, which also includes the purchase of new production equipment. The new "Grindeks" Innovation centre will be built in Latvia, Riga, Asotes Street 12. It will include complex manufacturing processes for active pharmaceutical ingredients, modern technological equipment and ensure the production of new, innovative products in Latvia. It will be the largest pharmaceutical plant in the Baltic region with automated and energy-efficient solutions.

Kirovs Lipmans, Chairman of the Council of JSC "Grindeks": "One of the cornerstones of the success of "Grindeks" is international cooperation and export to 97 countries around the world this year. Smart investments and the implementation of forward-looking projects are needed to keep our growth steady. I am proud of the development of "Grindeks" and the ability to provide our patients with effective and high-quality medicines. By celebrating the 75-year anniversary of "Grindeks", I would like to thank the employees who do their work in good faith and responsibility every day, without that our development would not be possible. I am also very thankful for our trusted partners, healthcare professionals and patients."

Sustainability – protecting the environment and green thinking as a priority

While developing and expanding its product mix for patients around the world, "Grindeks" takes care of protecting the environment at the same time and is paying increasing attention to green thinking as a priority.

Green thinking includes both – sustainable use of resources: creating an energy-efficient environment, saving electricity, introducing environmentally friendly solutions in both sorting and reducing waste. By 2025, "Grindeks" has a goal to fully give up the circulation of paper documents in the company, demonstrating its commitment to environmental protection. 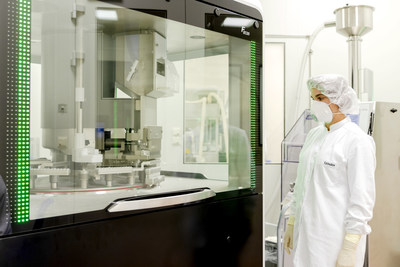