JINAN, China, Dec. 22, 2021 /PRNewswire/ -- In the afternoon of December 21, Conference of the International Trade and Investment Advisory Council for Shandong Province 2021 was held in Ji'nan. Zhou Naixiang, Deputy Secretary of the CPC Shandong Provincial Committee, and Governor of Shandong, issued appointment letters to 19 advisors from 12 countries including the United States, the UK, Russia, Germany, Italy, Switzerland, the Netherlands, Japan, South Korea, Singapore, Malaysia, and Mexico. He then engaged in comprehensive discussions with the newly-appointed advisors on the theme of "Integrating the new development pattern and promoting high-level development". 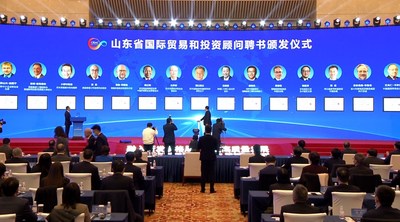 The 19 advisors put forward dozens of targeted suggestions on topics such as strengthening economic and trade cooperation and cultural exchanges between Shandong and Japan, South Korea, Russia, and ASEAN, the transformation of Shandong's manufacturing sector, green and low-carbon development, and further optimization of the business environment. They were very optimistic about Shandong's investment development opportunities and prospects. They all expressed a willingness to deploy their own resource advantages to actively make suggestions, and to contribute robustly to the cooperation.

Zhou Naixiang said that the establishment of the Conference of the International Trade and Investment Advisory Council for Shandong Province is an important initiative for Shandong to garner global wisdom and experience, improve scientific decision-making capabilities, promote high-level opening to the outside world, to better provide services, and to introduce new development patterns. He thanked the advisors for their inspiring speeches and suggestions and asked various government authorities to seriously study and absorb these suggestions. He said that he hoped the advisors will continue to care about and support the development of Shandong.