The Company is evaluating, and is in preliminary discussions, with sellers of renewable energy assets in India that would complement its current portfolio. Some of these assets may be sizeable and may result in significant acquisitions. The Company's strategy is to continue to build shareholder value and to evaluate acquisition opportunities that satisfy criteria of value accretive returns.

During the second fiscal quarter ended September 30, 2021, the Company issued Solar Green bonds (the "Bonds") of US$414 Million through its wholly owned subsidiary, Azure Power Energy Ltd at coupon of 3.575% maturing in 2026. The proceeds from the Bonds were used to repay the 5.50% US$ 500 Million solar green bond issued in 2017 with a maturity in 2022. The Bonds have a tenor of 5 years with amortisation and waterfall structures and their issuance is a leverage-positive transaction for the Company.

During the quarter ending September 30, 2021, the Company received a favorable order from the Appellate Tribunal for Electricity ("APTEL") relating to ongoing litigation in relation to the 40 MW Karnataka project having a power purchase agreement with Gulbarga Electricity Supply Company Limited (GESCOM). APTEL set aside the order of Karnataka Regulatory Commission ("KERC"), wherein the KERC had reduced the extension of time, reduced the PPA tariff and imposed liquidated damages. Subsequent to the period ended September 30, 2021, the GESCOM has further filed an appeal with Supreme Court against the order.

During the current year, the Company received complaints and anonymous whistle-blower reports which made various claims against certain of the Company's Key Managerial Personnel, related to their and the Company's actions in relation to the acquisition of and use of land in Rajasthan, Assam and Uttar Pradesh, as well as certain other corporate actions. The Company, through its Audit Committee, and with the assistance of external counsel and forensic auditors, has completed its investigation to determine whether the allegations made in the complaints or contained in the

whistle-blower reports are substantive. The issues raised, including those raised against Key Management Personnel, have been closed and allegations were not substantiated; however, the Company determined that its ethics policies regarding external consultants should be enhanced. The Company, through its Audit Committee and with the assistance of external counsel, will be taking remedial steps (including training and policy review).

During the third quarter ending December 31, 2021, the Company received an unfavorable order from appellate authority from the Mumbai Centre for International Arbitration ("MCIA"), relating to arbitration proceedings initiated by the Company's former chief executive officer in relation to his transition agreement. The Company is in process of evaluating the order received and will take necessary action in due course.

The Enforcement Directorate of India filed a Prosecution Complaint with a special court in New Delhi on October 1, 2021, in respect of an earlier Enforcement Case Information Report wherein Mr. Pawan Kumar Agrawal, the current Chief Financial Officer of the Company, is one of those named and charged with the commission of offences under Sections 3 and 4 of the Prevention of Money Laundering Act, 2002 of India in relation to Mr. Agrawal's prior employment. The relevant transactions that are the subject of the complaint predated Mr. Agrawal's tenure as an employee and as Chief Financial Officer of the Company, and the criminal charges are not directed at, and do not concern, the Company or its subsidiaries. The Company will continue to monitor the proceedings as Mr. Agrawal defends the charges made against him.

Certain PPAs, particularly the PPAs executed with SECI require the project developer to maintain its controlling shareholding (more than 50% of the voting rights and paid-up share capital) prevalent at the time of the signing of the PPA up to one year after the commercial operation date; however, transfer of controlling shareholding within the same group companies is permitted with the permission of SECI after the commercial operation date, subject to the condition that the management control remains with same group companies.

In April 2021, the Supreme Court of India while passing an order for a petition filed under public interest litigation (PIL) aimed at the conservation of two species of birds, the Great Indian Bustard and the Lesser Florican, directed the states of Rajasthan and Gujarat including developers having overhead transmission lines in identified priority and potential area to take necessary steps for conversion of overhead power lines to underground lines and in the interim install bird diverters on the overhead lines. However, in the non-feasibility of converting high voltage lines to underground lines, the matter can be referred for technical evaluation by a committee set up by Supreme Court. The conversion of overhead cables into underground power lines, wherever considered feasible by such committee, is to take place within a period of one year. The order of the Supreme Court mentioned the pass through of such expenses incurred by the power developers to the ultimate consumer, subject to approval of the Competent Regulatory Authority. The Company and other players in the industry through Solar Power Developer Association. as well as, Union of India (Ministry of New and Renewable (MNRE) have submitted a modification application to Supreme Court of India, seeking allowance for laying of over-head transmission lines outside priority areas as well as inside priority areas if the lines are of high/extra high voltage of 33 kV or above and to examine on case-to-case basis study for requirement of undergrounding even for 33kV and lower in priority area. The Management has preliminarily assessed that any costs incurred to comply with the said order are likely to be substantially or wholly recoverable by the Company under provisions of change in law and/or force majeure of their respective PPAs in due course following the prescribed procedure under the respective PPAs and law.

View the complete update at: https://mma.prnewswire.com/media/1716671/Operational_and_financial_Update.pdf 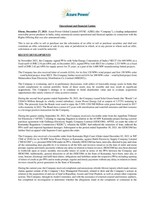