BEIJING, Jan. 13, 2022 /PRNewswire/ -- State Power Investment Corporation Limited (SPIC), a state-owned enterprise directly under the central government of China, is launching an event before the end of the year with the aim of encouraging its employees to express their admiration for and reacquaint themselves with Chinese traditional culture by learning and practicing Chinese calligraphy, a unique art form deeply rooted in the country's traditions and history. Using ink and a brush, Duan Wenxiang, from the State Nuclear Electric Power Planning Design & Research Institute, a subsidiary of SPIC, reproduced the famous verse from one of the country's most known poems, "As the bright moon shines over the sea, from far away you share this moment with me", a thought that has been oft repeated through the millennia, conveying his deep love and affection for far-off friends and family.

Zhang Yujun, a national electric power planning designer, chief expert at SPIC and a professorate senior engineer, spoke from the bottom of his heart when he expressed his deeply-felt best wishes with a calligraphic interpretation of "Prelude to Water Melody", a poem composed by Su Shi, one of China's greatest poets.

Chinese calligraphy is an ancient art of writing Chinese characters by using ink and a brush, and has evolved from the inscriptions on bones or tortoise shells, on drum-shaped stone blocks, and on bronze objects to seal and clerical scripts, while maturing over the years to a finality reflected by the cursive, regular and semi-cursive scripts that were formulated during the Eastern Han, Wei and Jin dynasties. In and of itself a unique art form, Chinese calligraphy is a grand cultural treasure for both the country and the world. Chinese characters, on the one hand, play an important role in the long history of social development, such as exchange of thoughts and cultural inheritance, while, on the other, serving as a vehicle for the development of the unique and incomparable kind of visual art that is Chinese calligraphy. 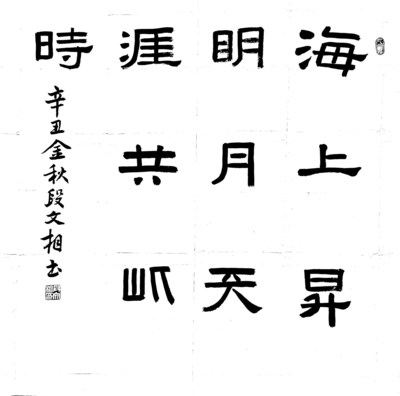 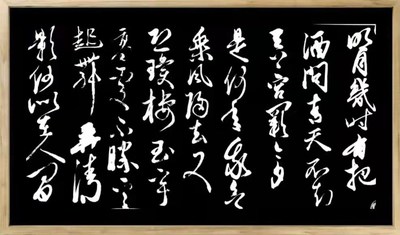